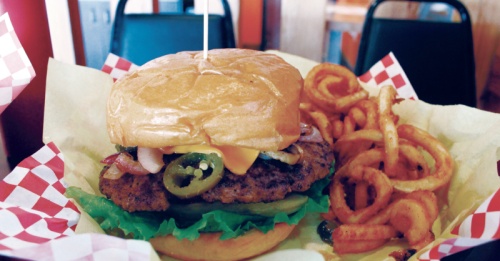 At K-Pop Burger & Crab King, customers are not strapped for options in a menu of Korean-style burgers and Cajun seafood, owner Joanne Jeon said.

“When all the family comes over, maybe they can try all different kinds [of food with] more combinations and variety,” she said.

Joanne played a hand in adding variety to the burger and seafood spot. The restaurant originally opened in 2016 as K-Pop Burger and sold only burgers under Joanne’s predecessor. When she heard that the restaurant was struggling, she took over, changed the menu and added seafood as a part of the restaurant’s identity.

Since its name change, K-Pop Burger & Crab King serves a variety of Cajun seafood entrees, crawfish and jambalaya as well as American- and Korean-style burgers, wings and appetizers.

The restaurant is, however, bringing in customers beyond Frisco. Joanne said residents in Little Elm, The Colony and McKinney often make their way to the Main Street storefront.

Hannah said the restaurant’s wide-open layout and long tables make it easy for large parties to enjoy the K-Pop Burger & Crab King atmosphere. Additionally, popular Korean music, or K-pop, plays throughout the restaurant, which she said appeals to younger customers.

A variety of options and a Cajun seafood sauce that “isn’t like anyone else’s” keeps customers coming back as well, she added.

“Even picky eaters have something to eat,” Hannah said.

Since then, Joanne’s burgers at the restaurant include kimchi, bulgogi, poppy seed egg buns and Korean Kalbi sauce. She plans to add salmon and shrimp burgers to the menu in the future.

Of the nine burgers currently on the menu, Joanne said she cannot pick her favorite.

“I’ve been in the restaurant business for a long time,” she said. “So it’s kind of hard to pick a favorite; everything is good.”