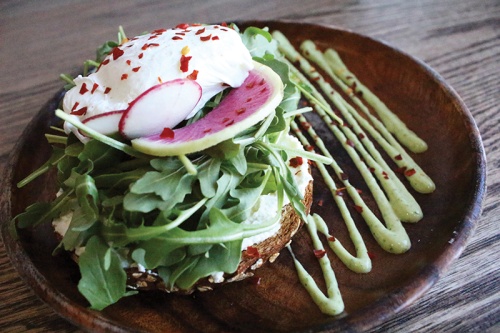 In 2007 Andrew Jin was working as a social worker in Los Angeles when he walked into a coffee shop.

“Whenever I walked into the coffee shop it was always so welcoming, and it has such a nice atmosphere with people talking and enjoying each other’s company,” Jin said. “I like the idea of one place providing that kind of environment with great coffee and food.”

Opening a coffee shop became Jin’s dream, but he said he realized he did not know anything about coffee. So he began working part time as a barista to learn about the industry.

Jin said he then started making his friends coffee and dishes for feedback.

Jin then moved to Michigan and continued working full time as a social worker and part time as a  barista. In Michigan, Jin attended training workshops on owning a restaurant. He moved to Plano after getting married and starting a family.

Jin even traveled across Europe and South Korea to visit different coffee shops for inspiration. He then started looking for locations to finally open his very own coffee shop when he landed on a location in Frisco, opening The Nest Cafe: Barista & Cook.

Jin wanted to make sure his coffee shop was modern but also felt like home for customers, so he included open space and comfortable seating.

Jin said it was important for him to provide good, quality coffee by using locally roasted coffee and incorporating latte art. The restaurant serves a variety of espresso drinks served either hot or iced. It also serves drip coffee, tea and a chai latte. Jin said he would like the coffee shop to roast its own coffee eventually.

Given Jin’s social work background, he said he would like to explore community partnerships with The Nest Cafe to help others.

“We just want to create a safe space with a warm environment where people can come together and encourage each other while enjoying great coffee and food,” Jin said.