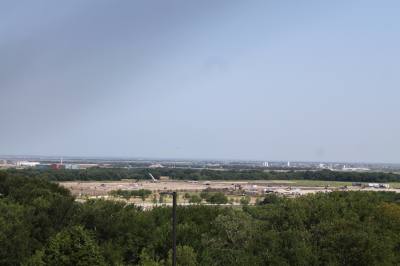 Work is underway at the industrial park that will house the Dallas Cowboys merchandising center.

The purchase brings the total acreage owned by Blue Star Land in Frisco to 500. Other properties include The Star in Frisco—home to the Dallas Cowboys World Headquarters—and an industrial park that will house the Dallas Cowboys merchandising center.

The 100-acre property, purchased in June, is located on the southeast and northeast corners of Rockhill and Dallas parkways adjacent to the industrial park.

Glendenning said the property could act as a front door to the industrial park.

"This 100 acres ... is more of a mixed-use-, retail-, commercial-, hotel-, restaurant- and urban living-type venue that would be different than The Star," he said. "But it would be the same concept."

Rockhill will be extended to the future PGA headquarters, making the road an essential corridor in the city, Glendenning said.

"We see that intersection evolving into a pretty dynamic interchange for accessibility to the PGA as well as back to the residential growth east of there," he said.

Glendenning said he has worked with Jones and Blue Star Land since the early 1990s.

Joe Hickman, general manager of Blue Star Land, said plans are not finalized, but the location is prime for another project.

"There's a lot going on in Frisco, and we think it's a great opportunity ... in the next several years to do a mixed-use development there," Hickman said. Read up on ongoing and upcoming transportation projects happening in the Frisco area.

Frisco’s Planning and Zoning Commission gave nods of approval toward adding more large-sized residential lots in a neighborhood to be located near the future PGA headquarters.

Drumsticks, wings and chicken strips are served in soy garlic and spicy varieties at Bonchon stores.

Treasure Box Toys to offer board games, gifts in Frisco

The family-run store offers a selection of trending and educational toys.