Building standards in Frisco to change under recently passed law 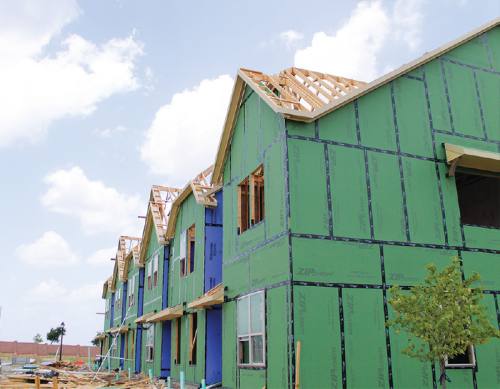 Wade Settlement is a residential project under development along Parkwood Boulevard. This project will not be affected by House Bill 2439, but future projects will.

The majority of Frisco has been developed under specific and strict building standards. But a new law that takes effect Sept. 1 could change the look, safety standards and price of incoming homes and commercial buildings on Frisco’s remaining quarter of undeveloped land.

Signed June 14, House Bill 2439 will prohibit governmental entities from regulating building materials and construction methods for residential and commercial buildings. As long as builders follow the national model code, the building standard established for the entire nation, cities can no longer set a standard for a building’s aesthetic. The law will not affect developments that are in progress or completed.

Frisco Mayor Jeff Cheney said building regulations for Frisco should be made at the local level.

“Not every city adopts the same levels of standards that Frisco does,” Cheney said.

The mayor and the city were so concerned about the effects of the bill that they reached out while the proposed legislation was still in committee.

A statewide application of the model code is “unrealistic,” Cheney wrote in a March 27 memo sent to Dade Phelan, the chairperson of the House Committee on State Affairs.

Resident expectations are best set by the city, he said in an interview with Community Impact Newspaper.

“Our residents have come to expect a level of standard,” Cheney said. “I’d say that the people that live here appreciate the fact that the city has held to these high standards.”

Now that the bill has become law, city officials are looking at what changes they need to make.

“Our City Council will be working with city staff to determine how the new legislation will impact Frisco and what our city will need to do moving forward as we work alongside our development community,” he said.

Under the new law, the city will not be able to hold developers to a higher standard, Cheney said. That becomes an issue, for example, as the city looks to revamp its historic downtown. He said the bill could have “unintended consequences” for redevelopment projects.

State Rep. Justin Holland, R-Rockwall, shared similar sentiments. Holland represents 12% of Collin County, including Frisco. He and state Rep. Tan Parker, R-Flower Mound, were the only two lawmakers in a House committee to vote against the bill.

“It worries me that these destination spots with historical feels are just going to look kind of normal,” Holland said. “We don’t want our cities to look normal; we want them to look exceptional and strive to be something other than a cookie-cutter-type thing that you might see somewhere else.”

The bill does not apply to buildings located in an area designated as a historic district on the National Register of Historic Places or a building designated as a Recorded Texas Historic Landmark.

One ordinance in particular that the city noted would no longer be enforced under the law is the requirement of at least 75% masonry on the first floor of a home.

Justin Webb, vice president of the Dallas Builders Association and owner of Altura Homes, said he does not predict Frisco will see any immediate changes when it comes to appearance.

Cement-like siding, stucco, engineered wood and other exterior materials could become more common without the city’s regulation, he said. But builders and developers would then have to build a home not widely accepted by the market, he said. Webb said he predicts traditional building and home aesthetics common to Frisco will continue.

“The market really does decide what’s acceptable and what’s not,” Webb said. “And I think this bill reiterates that private developers and builders should build what the market demands instead of government agencies mandating specific products and specific things that national codes don’t require.”

Scott Rose, CEO of Collin County Construction, said homebuilders these days already have to deal with a lot of regulations.

“You really have to be, as a contractor, more diversified nowadays in order to survive the regulation and the oversight,” Rose said.

The bill is a “huge win” for real estate affordability, said Adam Majorie, the chief advocacy officer for the Collin County Association of Realtors.

In general, he said, “when the city increases its building code above what is already fine for the health and safety of the residents, we do know that it comes with an increased cost.”

It’s too early to say how the new law will affect the price of new homes.

Data shows the number of Frisco residents struggling to afford a home in the city is increasing. Families who pay more than 30 percent of their income on housing costs are considered cost-burdened, according to the U.S. Department of Housing and Urban Development.

The average cost for a home in Frisco in May was about $470,000, according to a Collin County Association of Realtors Pulse report.

The new state law affects more than the appearance and cost of homes. Cheney said some of Frisco’s biggest standards are related to safety. In his memo to Phelan, Cheney listed 13 of them.

For instance, one prohibits natural gas risers with compression-type connections. This is because of frequent leaks due to some North Texas soil types that are acidic and corrode the connection.

The city also requires bonding for all metallic piping, including corrugated stainless steel tubing, or CSST. In the memo, Cheney stated the national model code bonding methods are not effective in preventing stray currents, or electricity flow from wiring flaws or imbalances. Stray currents have caused fires in Frisco homes, his memo stated.

Holland expressed similar concerns about these pipes. He said a lightning strike on a house with this particular piping could cause a leak or corrosion in the line.

“When you’re constructing a house, the way the CSST is installed is very crucial,” Holland said.

Frisco has until Sept. 1 to figure out what changes to make to comply with the new law. City Council members received legal advice during closed session at their summer work session on June 27 but made no decisions.

“Our goal is to ensure and encourage safe, high quality developments,” Cheney said. “We believe our best practices enhance our reputation for building the best place to live in America.”