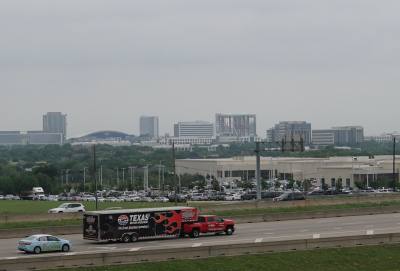 Sam Rayburn Tollway is being widened from Denton Tap Road in Lewisville to east of US 75 in McKinney.

Michael Rey, a spokesperson for the North Texas Tollway Authority, said the tollway was built to accommodate a future expansion.

Construction work has begun on the Frisco and Plano side of the SRT, and lane closures can be expected throughout construction. The toll road will be widened either from the median or the outer lane, depending on the location.

The SRT’s annual traffic counts are expected to increase by nearly 39 million transactions between 2015-22, according to NTTA projections.

“It’s our job to provide mobility to North Texas,” Rey said. “So as the congestion builds … we have to make the decision to reinvest into the roadway to try to decrease that congestion—that’s all part of the region’s plan.”

Several intersections through Frisco are planned to be under construction through this spring and summer.

Work on the Coit Road, Hillcrest Road and Legacy Drive intersections is occurring this spring. The Preston Road and Parkwood Boulevard intersections are expected to start work this summer.

On the Plano side, a new ramp will be built to replace the eastbound Preston and Parkwood exit ramps. Improvements are also being made to the interchange on the Dallas North Tollway to help with traffic flow.

Any overnight or weekend lane closures in Frisco and Plano during construction will be determined on a weekly basis, Rey said.

Widening construction will not take place at the Custer Road, Independence and Dallas parkways intersections because those intersections were previously modified to accommodate four lanes, Rey said.

The city of Frisco is not doing any work on the SH 121 frontage road in conjunction with the SRT widening project, said Paul Knippel, the Frisco director of public works and engineering services.

As businesses—from the Toyota North America headquarters in Plano and soon-to-be Independent Bank in McKinney—open along the SRT, more cars travel the tollway.

NTTA officials said widening the SRT will help accommodate for this growth.

The $200 million project will be funded through toll fees collected by the NTTA. Kevin Feldt, program manager for the North Central Texas Council of Governments, said NTTA’s projects are “‘you bring your own money, you get your own project’ kind of deal.”

The added capacity along the SRT will help with the area’s growth.

The NCTCOG projects the region’s population will increase from 7.4 million today to about 11.2 million in 2045. The NCTCOG works with cities, counties and transportation agencies to better coordinate regional planning.

Transactions are projected to rise by another 13 million over the next three years, according to NTTA data.

The restaurant serves African fusion meals and a full bar with music and an entertaining atmosphere.

The facility offers a variety of healthcare services for men.

Above the challenges, Pelham underscored the importance of moving beyond the campaign and beginning to govern.

“The last 3 1/2 years of working with this EDC team have been incredible,” Patterson said during his announcement.

Frisco ISD proposes using the extra funding to create a free, onsite employee health clinic and to give teacher raises and one-time employee stipends, among other items...

Voter turnout in Frisco plunges from November to May elections

While local elections allow residents to decide who will represent them on issues such as fixing local roads, repairing sidewalks, setting trash pickup rates and reviewing developments, it is not easy to get people to vote in these races, said Janice Schieffer, vice president of voter service for the League of Women Voters of Collin County.

Community Impact Newspaper asked Pelham what is in store as she prepares to undertake the new role.