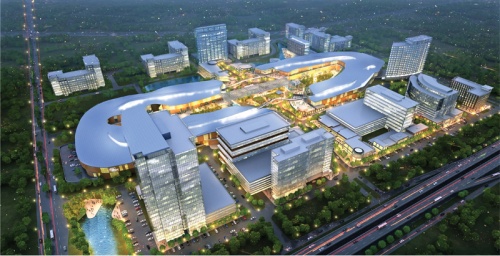 Lesso America plans to build a mall development on 77 acres along US 380.

When Frisco City Council approved zoning for a mall development along US 380 in September, Frisco Mayor Jeff Cheney likened the potential of that development to Stonebriar Centre, the mall along SH 121 that opened in 2001.

Cheney said Frisco’s leaders knew Stonebriar Centre had the ability to “transform an entire region.” Located on what was mostly farmland prior to 2000, Stonebriar Centre helped generate sales tax revenue as well as development and infrastructure in the southern half of Frisco.

The northern half of Frisco has also remained relatively untouched by commercial development, but it may soon see a transformation similar to what Stonebriar Centre brought as five developments are either under construction or in the early planning stages.

The mall development along US 380 is expected to include retail, residential and office uses. A 2,500-acre land parcel, once belonging to the Bert Fields Jr. estate, was purchased in August with plans for retail, office and residential space. The University of North Texas will begin construction on its branch campus in 2022. An industrial park called Park25 is already under construction and recently changed hands to be developed by Jerry Jones’ Blue Star Land. And Texas Health Resources is building a hospital and medical offices along the Dallas North Tollway.

Along with this vertical development comes needed infrastructure: roads and water. While the city has master plans in place for transportation and water needs, development could spur those plans to shift or advance quicker, said Assistant Director of Engineering Jason Brodigan said.

“We know what we need to build; we just don’t know when exactly we’re going to build it,” he said. “How development occurs in the city really determines that.”

Frisco resident Judge Bugbee, who lives in the Crown Ridge neighborhood between Panther Creek and Rockhill parkways, said he is overall pleased with the development happening around his home but wishes the infrastructure could have been put in place sooner.

“Our concern is they’re building the fun stuff, but they should’ve built a way to get to the fun stuff first,” he said. “It would’ve been nice if they would’ve gotten the infrastructure of the roads done and then moved forward with adding all this new development.”

Based on the outlined development in the Comprehensive Plan, the department can determine whether an area of the city needs a major roadway or smaller roadways.

The city plans road projects both ahead of and after the announcement of developments, Knippel said. Rockhill Parkway, for instance, was extended well before major development was established around it, he said.

Every type of land use is going to generate some traffic, Knippel said. But commercial development creates the most traffic, he said, and the four planned developments in North Frisco are more commercial than residential.

Knippel said city staff communicates with developers and works closely with the development services department to understand the components of planned developments so that road projects can be timed appropriately. Staff has already met with the engineers on the Bert Fields Jr. development to get a better understanding of the development’s timing, he said.

“When we say we react, we’re looking ahead to understand what the likelihood of development occurring is,” Knippel said. “We interact with developers when they’re just thinking about purchasing property and laying out preliminary plans. We take a read on the likelihood that [development] is going to happen, and we begin to plan accordingly.”

Knippel said the city has nearly exhausted all of its road bond funds from the 2015 bond package, and more are needed to fund future projects. The city is pitching road projects to the Citizen Bond Committee for a possible bond election in May 2019, he said.

Several water projects are in the planning stages, including installing a water line along Panther Creek Parkway and an elevated storage tank at Rockhill Parkway and Preston Road.

The city determines its water needs based on the types of developments that are in the works, Knippel said. For instance, commercial development does not have as much of an impact on the wastewater system as residential development.

“There’s some complicated computer models that determine our master plans for water and wastewater,” Brodigan said. “Anytime a bigger development comes in, we’ll study the specific impact on the model that that development may have depending on what they want to do.”

Water and wastewater infrastructure is funded through water and sewer fees. The North Texas Municipal Water District, which supplies the city’s drinking water, increased its fees for member cities this year. In turn, Frisco increased its water rates by about 2 percent for the 2018-19 fiscal year.