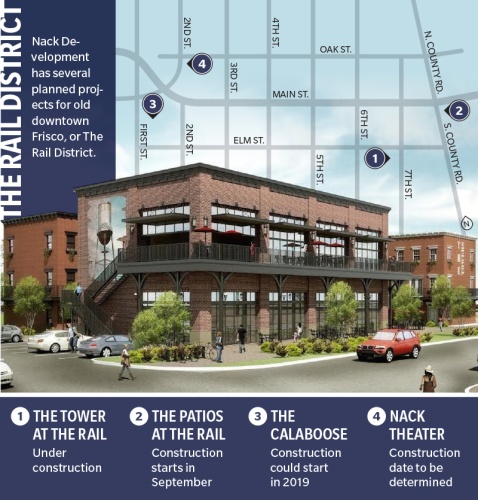 The Tower at The Rail broke ground on July 16 in old downtown Frisco.

The revitalization of old downtown Frisco has begun with the groundbreaking of The Tower at The Rail on July 16.

Nack Development in spring 2017 announced plans for several projects that would bring more retail, restaurants and even residential to the downtown area including The Tower at The Rail.

Nack Development President Donny Churchman has lived in Frisco for eight years and has said he is trying to create a “rebirth” of downtown, where people can eat, shop and stay.

“With the bigger projects happening along the Dallas North Tollway, sometimes we forget what started this city, and that’s right here in old downtown Frisco,” Churchman said.

The Tower at The Rail, 8763 Seventh St., will include eight luxury townhouses with rooftop terraces overlooking neighboring restaurants and retail including Boxcar Bakery and furniture store Boxcar House. Construction is expected to be complete next spring.

The Patios at The Rail, a three-story building to be constructed at 7561 Main St., is planned to include retail, restaurants, office space, an event center, two rooftop patios, a park and a parking garage. Construction plans still need to be approved by the city, but the project could break ground in September with construction taking about 12 months, Churchman said.

Churchman said The Patios has caught the attention of some international restaurateurs from Brisbane, Australia, who have signed an agreement to bring Honour Espresso, a coffee shop, to the development.

In February, Nack Development announced a third project, The Calaboose, on the southwest corner of Main Street and Second Street. The upscale residential community will consist of 20 luxury townhouses and more office space. The project still needs City Council approval for rezoning, but Churchman said it could break ground next year.

Nack Development is also working on building a new theater, called Nack Theater, on the southeast corner of Second and Oak streets. The theater will be home to the Frisco Youth Theatre.
SHARE THIS STORY