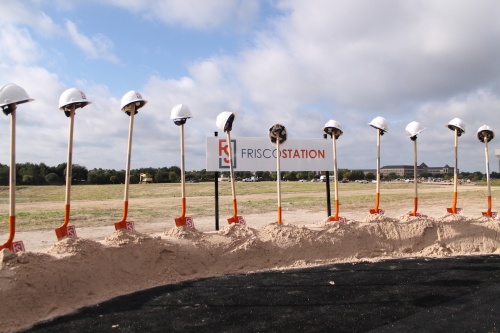 Shovels are lined up for Frisco Station's groundbreaking in 2016.

Frisco Station, a 242-acre mixed-use development, is the next of Frisco’s $5 Billion Mile developments to start opening buildings.

The plans for the development include office space, urban living residences, shopping, dining, parks and trails and health and wellness space.

The development wraps around The Star in Frisco at the northwest corner of Warren Parkway and the Dallas North Tollway. The project is a joint venture with The Rudman Partnership, Hillwood Properties and VanTrust Real Estate.

Hillwood Properties President Mike Berry presented an overview of the development Wednesday at a CREW Dallas luncheon. Community Impact Newspaper has reported on many aspects of Frisco Station, but here are some lesser known facts about the largest development along the $5 Billion Mile.

Green space is spread throughout every aspect of the urban development. The largest chunk of open space is a 15-acre park south of the corporate campus space. That is about three times the size of Klyde Warren Park in downtown Dallas.


First building to open this year

The first office building will open within the next couple of months on the southern end of the development along Warren Parkway.

In addition to that, Station House, a 300-unit urban living development, is about halfway through construction. Canopy by Hilton is expected to begin construction this fall.


Connectivity could be in future plans

With its proximity to Hall Park and The Star, Frisco Station could one day be connected to surrounding developments through transportation. Berry said Frisco Station developers have been in talks with other developments about the possibility of incorporating an autonomous shuttle system to transport visitors between developments.

Berry stressed that the idea for the shuttle is in very early talks, but it would make sense for the future connectivity of the area.

“If you want to go from [Hall Park] to have lunch at Frisco Station, you’re not going to do it; you’re going to have to get in the car,” he said. “But if there’s an autonomous shuttle that’s on a regular circuit going back and forth, then you really connect all the projects together.”