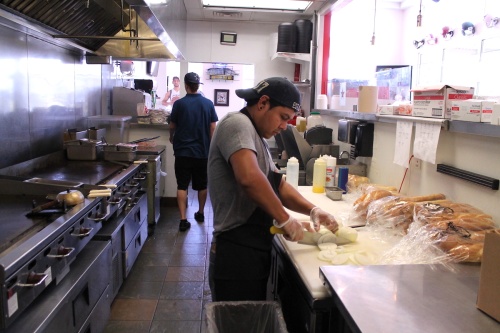 In Texas, the average salary for a job in the restaurant industry is about $70,000 less than what is needed to afford the median monthly mortgage in Frisco. A piece of paper taped to the window of the Texadelphia location in Frisco reads “Now Hiring.” Manager Andrew Long said he has had that sign posted for three months with only a handful of applicants to show for it.

Long said he has had better luck finding applicants online because most potential employees do not live in Frisco. He said many of his current employees live in McKinney, Dallas and other surrounding cities. Long himself lives in Plano.

He said he would like to live in Frisco, but his $50,000 annual salary makes it difficult for him to afford housing. Since most potential applicants are in a similar financial position as Long, he said it is difficult to find workers who are willing to commute from another city.

“Not being able to find employees on a consistent basis, sometimes that affects service,” he said. “If it starts to affect the service, then it’s hard to get customers to come back. It’s like a domino effect.”

This hiring struggle is not exclusive to Texadelphia. Tony Felker, Frisco Chamber of Commerce president, said he has witnessed this issue across the city.

“You can’t go to a restaurant anywhere in town without ‘Hiring Now’ signs,” he said.

The school district is also seeing the effects of rising housing costs. For years, Frisco ISD’s highest enrollment has come from its elementary school population. Next year, that trend is expected to shift to the middle school and high school populations.

“You can hypothesize as to why that flip has occurred, and the most consistent one we hear—and we get a lot of nods from Realtors—is that Frisco is no longer a place where young families with elementary age kids can afford such a thing as a starter home,” former Superintendent Jeremy Lyon said at a meeting in March. “There is no starter home in Frisco anymore.” According to the U.S. Department of Housing and Urban Development, families who pay more than 30 percent of their income on housing costs are considered cost-burdened. These families may have difficulty paying for necessities, such as food and transportation. The current statistics from the city of Frisco show that nearly 41 percent of renters and 24 percent of homeowners are cost-burdened. The average salary for an FISD teacher is $54,526, which is slightly more than what is needed to make the median monthly rent.

“Affordability of housing and cost of living are often significant factors in the decision-making process for educators seeking employment,” said Pamela Linton, FISD assistant superintendent of human resources. “Bearing this in mind, we know that offering competitive compensation—including pay and benefits—is critical to the district’s goal of recruiting and retaining the highest quality staff.”

The average salary for a Frisco police officer and firefighter is $73,755.44 and $72,625.76, respectively, both of which are less than what is needed to afford the median monthly mortgage in Frisco. Frisco’s police and fire department officials said the cost of housing has not affected recruiting efforts.

City officials have acknowledged the issue of affordability in Frisco. Several organizations exist to help lower-income families and individuals afford a house or apartment in the city, such as the Social Services and Housing Board and the Frisco Housing Authority.

In addition, three apartment complexes in Frisco offer nearly 400 tax credit housing units, which are reserved for tenants who earn less than a certain percentage of the area medium income.

There are challenges to bringing in more affordable housing options to the city, Frisco Mayor Jeff Cheney said. Property owners have the freedom to set their own prices, and the city cannot force developers to offer housing at a certain price, he said.

“Texas is very much a property-rights state,” Cheney said. “You can’t force anyone with what they can do with their property.”

Still, some houses in Frisco are selling at reasonable prices, Cheney said. Within the past year, almost 900 homes in the city were sold for less than $300,000.

When most people talk about affordability of housing in Frisco, they are not referring to government programs to assist lower-income residents, Cheney said. Rather, many are referring to the rising cost of living in the city, especially in regard to tax bills, he said.

Some Frisco residents do qualify for tax credit housing. The Housing Tax Credit Program offers a tax break to developers who provide affordable rental housing. Developers can choose how many of their units to offer as tax credit units. Tax credit housing is not offered through or regulated by the city.

In 2012, the city created a board now known as the Social Services and Housing Board. The board allocates funds from the Community Development Block Grant program—a HUD program—for city initiatives to help lower-income households.

The board is also in charge of the city’s Targeted Down Payment Assistance program. The program helps school district and city employees—including first responders—pay for the down payment and closing costs of a house in Frisco.

Assistant City Manager Nell Lange said the city recently increased the program’s forgivable loan amount from $5,000 to $10,000 because of the rising housing costs in the city.

Lange said there have been suggestions to open up the program to more than just city and FISD employees, but no formal decision has been made yet.

The Frisco Housing Authority is regulated by HUD and offers 20 low-rent housing units. The waiting list for those units is full, and no applications are being accepted at this time.

Tax credit housing units are managed by private developers. Depending on how many units are available and the rent relief offered to tenants, developers can get a certain tax break from the state. Rent relief is offered to renters who earn a certain percentage less than the median income of the area. For instance, renters who earn 60 percent or less of the area’s median income—which is calculated by HUD—could qualify for tax credit housing.

For an individual to qualify for a tax credit unit at 60 percent of the area median income, he or she would need to make $30,840 or less a year. That salary threshold increases with the number of people in the household. According to the average salaries in Texas, some restaurant workers, including servers, could qualify for tax credit housing in Frisco, while others—such as managers and cooks—may earn too much money to qualify.

Frisco employers aim to attract employees living in other cities through benefits and competitive salaries.

FISD can recruit for some positions, even if employees live outside of the district, by offering higher salaries, sometimes by as little as 20 cents more per hour, said Doug Zambiasi, deputy superintendent for support services.

“It can be a challenge for the district to fill positions in support areas such as child nutrition, transportation and custodial services, and FISD recruits for many of these positions year-round,” he said. “In addition to pay, the district highlights benefits such as the opportunity to have weekends off, as well as time off while children are out of school.”

Brian Livingston—who owns eight restaurants in the Dallas-Fort Worth area, including Texadelphia in Frisco—said his Frisco restaurants are some of the toughest to staff. To entice applicants, Livingston said he offers benefits, such as health insurance for full-time employees and flexible scheduling.

Still, he said transportation costs to Texadelphia can be a deterrent, especially since the restaurant is located right off of the Dallas North Tollway.

“You take gas and tolls into account, and [a paycheck] can get eaten up pretty quick,” he said.

Frisco Diner owner Afrim Seferi said his restaurant’s success has allowed him to pay well. And since the diner is not open in the evenings, most employees can leave the restaurant by midafternoon. Seferi said these perks have worked for him so far.

He said he would like to open a second location, but he is hesitant because he is having trouble finding a couple more employees for his first location.

“Because of the growth of the business, I need a few more people,” Seferi said. “We can maintain like this, but I like to have a little extra, and I’m finding it a little more difficult as of right now to get that extra help.”

Other options the city has explored include more transit alternatives for those who commute into the city. A commuter rail line is in the city’s long-term plans, but no immediate plans for public or commuter transit are on the city’s radar at this time, Cheney said.

Cheney said the city will continue to work with businesses to explore viable solutions for their hiring struggles.