Elevations for the proposed townhomes give an idea of what developers are looking to achieve. (Illustration courtesy city of Frisco)

The Frisco Planning & Zoning Commission approved the addition of townhomes to the Edgestone residential project at the northeast corner of 4th Army Drive and Stonebrook Parkway. Roughly 11 acres would be allocated to the townhome development, per meeting documents. This would result in about 61 townhome units. Of that, about 1.8 acres would be developed as usable open space that will serve residents' needs and act as “prime gathering areas for families and neighborhood events,” meeting documents stated. The applicant has proposed elements such as shade structures, walking paths, a dog park, open lawn areas and more for the open spaces. 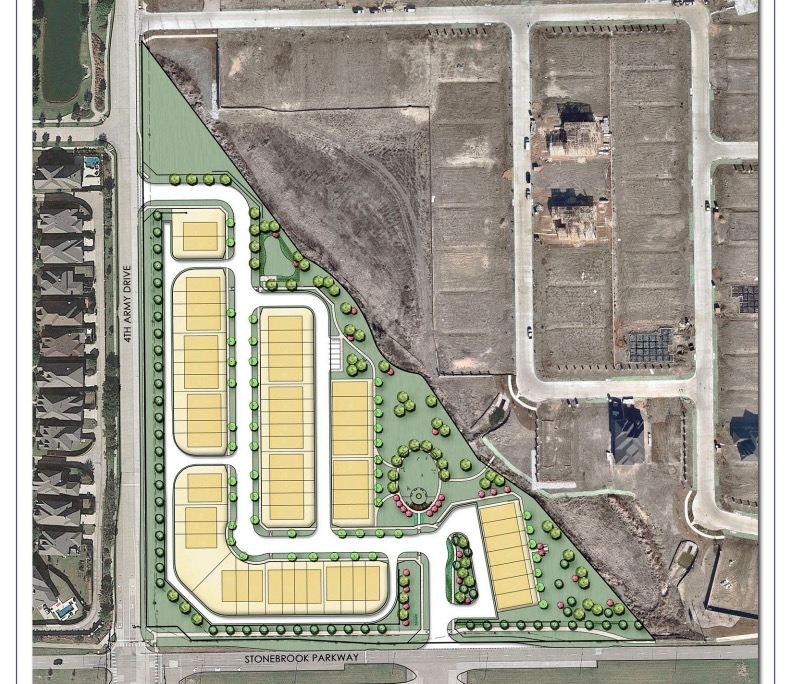 Additionally, the drainage area along the northeastern boundary of the property would be developed as a pedestrian crossing, documents stated. While the townhome area would be developed within the Edgestone site, it would have its own separate HOA, the applicant told commissioners. Starting prices for the townhomes would be about $500,000.

Per the developer’s proposal, the site plan would focus the homes away from busy streets to respect adjacent developments. It would help with existing traffic with a right-turn lane onto 4th Army Drive and would have a low impact on the schools because most people who live in townhomes typically do not have children, the proposal stated.

Several residents from the surrounding neighborhood came forward, all to speak in opposition of the project. Residents voiced concerns regarding what the townhomes would do to their property values, the townhomes eventually becoming rental properties and the additional traffic of the area. Residents said they were told single-family homes would be coming to this property and said they were upset to see it proposed as townhomes now.

Following citizen comments and presentations from city staff and the applicant, commissioners were divided about the project, except for Jon Kendall, who abstained from this item on the agenda. Steve Cone and David Box were against the project, while Ed Kelly and Bryan Morgan were in favor of it.

“What do you do with a triangular piece of land?” Kelly said. “We looked at this and worked this problem hard. ... This is a product that’s needed in Frisco; it’s something that is a lot better than apartments for sure. And it brings the quality of person to the city that we think is a high professional, that doesn’t really have a lot of impact on schools or services.”

Cone said he wanted to see more interaction between the developers and the residents before the project moves forward. He also saw issues with the parking, something Box took issue with as well.

“The increased density is just a lot,” he said. “I don’t think the parking supports this.”

The split decision resulted in commission Chair Rob Cox having to make the tie-breaking decision. He ultimately voted to approve the project and send it to council.

“I believe that we have voted in representatives that should make this decision,” Cox said. “So I'm going to vote in the affirmative so we can go to the City Council and your city representatives can make a decision on this with a public hearing."

The item will be sent to the Frisco City Council for the April 19 meeting. Commissioners encouraged residents who have concerns with the project to reach out to council members to discuss their concerns and to learn more about the project in the meantime.
Edgestone Frisco Planning & Zoning Commission Frisco Frisco Development
SHARE THIS STORY