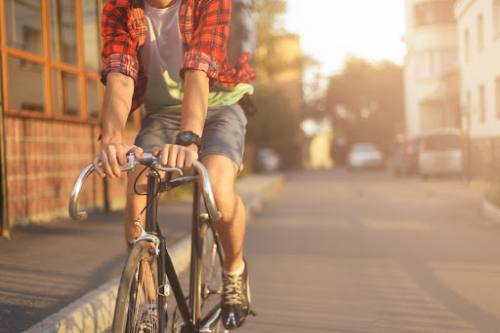 These changes will likely not happen immediately. Most new trails will happen in conjunction with new development, some of which could take years to get off the ground. The city will also determine projects based on available funding.

The focus on bike lanes and routes in the master plan was driven by the growing demand in Frisco, Parks Planning Superintendent Ricardo Sanchez said.

“As development comes and the city keeps growing, other methods of transportation become more relevant,” he said. “There are more bikers in the city.”

Encouraging cycling through more on-street bike lanes and routes is also a step toward reducing the city’s carbon footprint, said Frisco resident and cyclist Geoff Davis, who also serves on the Parks and Recreation Board.

“Cycling, walking [and] biking [are] something that can help reduce one more car on the road for just that short trip,” Davis said.

Though on-street bike lanes and routes are intended for recreational use, residents may begin using them as a short commuting solution.

Personal vehicles will still be the top commuting option for the foreseeable future, said Paul Knippel, the city’s Engineering and Public Works director. But some residents might eventually opt to bike rather than drive to work, he said.

Parks and Recreation Director Shannon Keleher, who worked in Florida before moving to Frisco, said she has seen cyclists take advantage of bike trails for work purposes when the paths made it easier to navigate in and around busy roadways.

Keleher added it may not be feasible for a whole family to use bike trails to commute, but single professionals may be inclined to bike to work like she did in Florida.

“I taught school at that time, and I used to ride my bike because there was a safe way to do it at that point,” she said. “I think it’s limitless; we’re just going to have to see.”

On-street biking could take several forms. Bike routes, for instance, would allow motorists and cyclists to share the roadway, typically on low-speed roadways or as a way to fill short gaps in the off-street biking trail network. Bike lanes are dedicated spaces for cyclists on roadways, and are sometimes buffered from regular traffic lanes.

Several Frisco roadways—such as Main Street, Lebanon Road and Panther Creek Parkway—are proposed to gain on-street bike lanes in the master plan. Whether these roadways will actually receive bike lanes will not be known until a new development or roadwork is underway, Frisco Development Services Director John Lettelleir said.

“The maps are templates; they’re not guaranteed,” Davis said. “Those are things that council and staff would have to approve … but [there] are goals to have those maps to be a reality in 20 years.”

Any proposed on-street bike lanes and routes—and even off-street trails—must get approval from Frisco City Council before work can begin. Many proposed trails will be presented to city council in conjunction with new developments or large road projects.

For instance, city staff is working with developers of the Fields property and Professional Golfers’ Association of America project to determine where to include trails and on-street biking, Lettelleir said.

“This plan will absolutely be used for all the new development and vacant land in the city of Frisco to make sure that we are building these hike and bike facilities and that they connect properly,” Knippel said.

Projects in Frisco’s hike and bike network are often funded through bonds and grants.

Residents approved a $53.5 million bond proposition in May, which included funding for new trails, for the Parks and Recreation Department. Some of those funds will be used to acquire land for regional connector trails.

The North Central Texas Council of Governments also has grants available annually for pedestrian and bicycle facilities. One of the requirements for receiving those grants is proof the proposed project is part of a larger plan, such as a hike and bike master plan.

Though it may take years to create a fully connected hike and bike network, the new master plan will help the city account for the needs of cyclists, Davis said.

“We’re not Portland yet, but the goal of the cyclists is for Frisco to be more progressive with who we are,” he said.