Local group advocates for Frisco to construct its own animal shelter 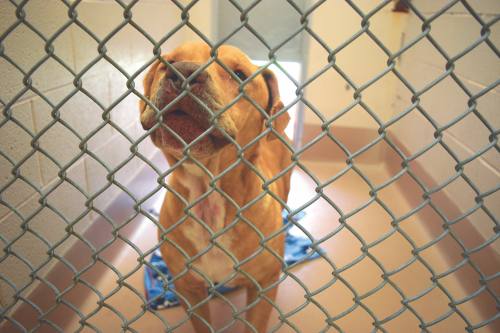 A dog waits to be adopted at the Collin County Animal Shelter in April.

When Frisco’s Animal Services Department is unable to immediately reunite lost pets with their owners, it transports those animals to the county shelter in McKinney. A group of Frisco pet owners wants that to change.

Members of the Frisco Pet Project group are advocating for the city to construct an animal shelter within city boundaries.

For now, though, the city of Frisco plans to continue its partnership with Collin County, officials say.

As part of an agreement with the county, the Frisco Animal Services Department transports any pets not reunited with their owners in the same day to the county animal shelter.

In 2018, the Frisco Animal Services Department transported a total of 450 animals to the county shelter. The department, which falls under the umbrella of the Frisco Police Department, transported 114 animals in the first quarter of 2019.

Marla Fields is one of the original organizers of the Frisco Pet Project. She said she saw a need for a Frisco-based animal shelter while rescuing cats from local organizations.

“Many of the [rescue organizations] are doing fabulous things, but they don’t have a facility,” Fields said. “They are working in cooperation with the PetSmarts and the Petcos and the Hollywood Feeds to do adoption programs.”

Frisco Mayor Jeff Cheney said city staffers have considered allocating funding to build an animal shelter in the past but determined the benefits of partnering with the county outweighed the negatives.

“We have a partnership with Collin County along with other cities to collaborate as a region to try to provide the most cost-effective services for this need,” Cheney said.

Building an animal shelter would likely be funded through bonds. But the city did not include a shelter among the projects in the May 4 bond election.

“The pros to working as a region is you have a lot more resources available,” Cheney said. “You’re pooling money to service, in our case, the 450 [animals] that were transported [in 2018]. It’s just much more efficient and cost effective.”

Fields said one of the other primary reasons the pet project wants an animal shelter in Frisco is to shorten the commute that residents make when picking up their pets in McKinney.

“Sometimes the hours aren’t conducive to your hours,” Fields said. “And you may not discover that your pet has gotten lost … until after hours, and then the pet has to stay over there.

Cheney said the distance between Frisco and the McKinney shelter is an incentive for the city’s animal services department to locate the owners of lost pets within the same business day.

“What our city staff does is work extra hard to try to bring the pet back to their home,” Cheney said. “Using social media, Nextdoor, waiting until they’ve exhausted their opportunities to actually return that pet to their homeowner has actually proven … to be more effective.”