Low turnout typical for Frisco's city and school board elections 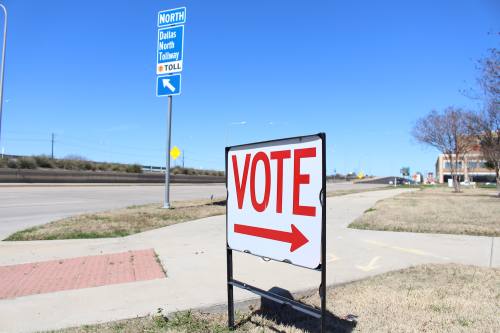 When deciding the issues that most affect Frisco residents’ every-day lives—from trash collection and street repair to new schools—voters may see the most direct impact from local elections.

However, if history is any indication, only a small share of Frisco residents who are registered to vote will actually cast ballots in the May 4 elections, and those who do vote will not closely resemble the general vot-ing-age population, research shows.

Voter turnout rates for municipal elections in Collin and Denton coun-ties typically hover in the single dig-its. In contrast, roughly eight times as many Dallas-Fort Worth voters turned out for last November’s mid-term elections.

This can have a profound impact on the nature of representation at the ground level of local government, said Cal Jillson, a political scientist at Southern Methodist University. Low turnout also means an organized group can have a greater influence on the direction of its city or school district even if the group’s numbers are small, he said.

“That’s not bad in the sense that those groups are welcome to turn out. They generally watch [local politics] more closely than the average voter,” Jillson said. “But at the end of the day, if the issue is, ‘Is a single-digit, mid-teen [percentage] type of turnout a sufficient democratic foundation for local government?’ I think the answer is probably no.”

In May 2018, 7.5 percent of Frisco voters turned out to elect two council members.

In a 2016 study by Portland State University, researchers found municipal election turnout in 10 of America’s 30 largest cities was lower than 15 percent. More than half of voters in local elections in 50 cities were age 57 or older—nearly a generation older than the median age of all eligible voters, according to the study.

The study also found voter turnout tends to fluctuate from neighborhood to neighborhood, with a significant number of residents living in what the study referred to as voting deserts. Turnout in these voting deserts was lower than half the city average.

There is a relatively simple way to improve voter participation in local elections: Hold them at the same time as statewide and national races, Jillson said. While this approach would almost certainly increase turnout, it would come with its own set of problems, he said.

City and school board races are often intended to be nonpartisan, but a large number of voters are driven by their affiliation with a major political party, Jillson said.

“The reason that municipal elections are held off of the major election cycle … is that they want voters—even if the number of voters are small—to be focused on local issues and not be distracted by Beto [O’Rourke] or [Donald] Trump,” Jillson said.

For the Frisco ISD tax ratification election in August 2016, the voter turnout rate was 16 percent. The school district held another TRE and bond election during last November’s general election, and the voter turnout was 60 percent.

Frisco political consultant Tracy Gamble has studied local voting patterns for years. Those who vote in city and school elections tend to show up reliably from year to year, she said. She advises candidates to appeal to those voters rather than try to get new people to the polls.

That means Frisco candidates this year would focus more on the 7,144 voters who cast ballots in May 2018 over the more than 88,000 other registered voters who declined to show up.

Frisco Chamber of Commerce President Tony Felker served as a Frisco City Council member from 2003-09. He said one of the reasons for low voter turnout in Frisco, especially during City Council elections, is people may be content with how the city is being run.

However, Felker said voter turnout is higher when there is a divisive issue on the table.

“Throughout history, working with the chamber and having been on council, it’s the issues that bring people out because there are so many people on opposite sides of the issue,” Felker said. “That’s when you have people fired up and ready to vote.”

Ram Maji is the co-chair of the Frisco Indian Affairs Committee, which works to educate the Indian community about local government and city activities. Maji said some people in Frisco’s Indian community may not be eligible to vote because they are not citizens.

“Whether you’re a citizen or noncitizen, we all pay taxes, and our children go to the same schools—our main goal is to educate the Indian community about what is happening in their community,” Maji said. “It’s a civic responsibility because we want to make sure we are picking the right candidate.”

These groups sometimes view a local office as a stepping stone to higher office, Gamble said. Serving on the city council or school board requires a fraction of the campaigning and cost of a larger-scale campaign. These positions are also viewed as a resume booster for a later run for another office.

Candidates navigate this increasingly partisan environment in different ways. Gamble, who is not working for any candidates this election cycle, said she advises her clients to stick with a nonpolitical message. She also tells them to appeal to voter demographics. Senior citizens, for example, are known to be active in local elections, she said.

Frisco Lakes, a retirement community in west Frisco, had the highest percentage of voters turn out in the last city election.

“In Frisco, with all the issues we have, we should be actively involved,” Frisco Lake resident Ted Hart said. “We get such a great turnout [in Frisco Lakes] compared to the general populous, but we can do better.”

Hart said the partisan mindset that defines the statewide and national races is not particularly useful in a municipal setting.

“I like that city council and school board races are nonpartisan because it forces people to understand the issues a little bit better rather than just blindly going ahead with a partisan vote,” Hart said. “It forces you to understand the position of individuals.”