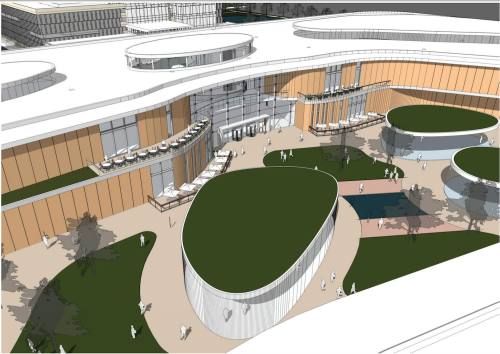 Lesso American plans a large mixed-use development on 77 acres that will include a shopping mall.

Frisco City Council tabled a rezoning request that would allow a multilevel shopping center with additional retail, office, hotel and urban living residential on 77 acres south of US 380 and west of Dallas Parkway.

The proposal has been tabled until the Sept. 4 meeting.

Lesso America, a subsidiary of building material manufacturer China Lesso Group Holdings Ltd., is planning the development, which is planned to to have an enclosed shopping center with showrooms for Chinese-brand home products as well as other retail and restaurants.

Barry Hand, a principal at architecture and design firm Gensler, said the development is a concept that is successful in Asia and one that Lesso would like to bring to the United States.

"In a very loose way, think of it as a Chinese IKEA," Hand said. "How IKEA brings Scandinavian manufacturing together into one collection of home goods and housewares, [it's a] similar concept that Lesso has in bringing Chinese manufacturing."

The property would be allowed to have a maximum of 1,200 multifamily units if it is rezoned.