Water storage tank on Preston to be demolished within 30 days 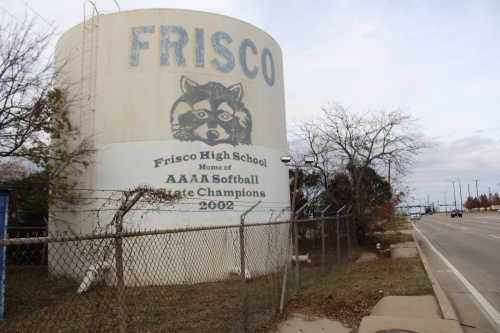 The water storage tank on Preston Road and Gary Burns Drive will be demolished.

The water storage tank on Preston Road with a painting of a raccoon that reads “Frisco High School, Home of the AAAA Softball State Champions 2002” will be torn down.

On Tuesday night, Frisco City Council awarded a bid of $24,300 to Whittaker Lane Contracting to demolish the water tank.

The bid includes the full demolition and site cleanup of the 180,000-gallon water storage tank at Preston and Gary Burns Drive. The storage tank will be demolished within the next 30 days.

According to a city staff memo, the tank has been decommissioned for many years, and the demolition and site cleanup is the beginning of property improvements in the area. City staff will now begin reviewing the demolition and cleanup of the metal building behind the storage tank.

Council Member Will Sowell asked Assistant City Manager Nell Lange to see about including a historical marker on the property that explains the history of the water storage tank.

Lange said she would work with city staff to see about getting the marker.

“I think part of the concern is that it’s had that softball championship painted on the side for so long,” Deputy Mayor Pro Tem John Keating said.

Frisco Mayor Jeff Cheney said that maybe it is time to find a new location to list out the high school championships.

Council Member Tim Nelson said he encourages people to take photos with the storage tank in the background in the next 30 days before it is demolished.