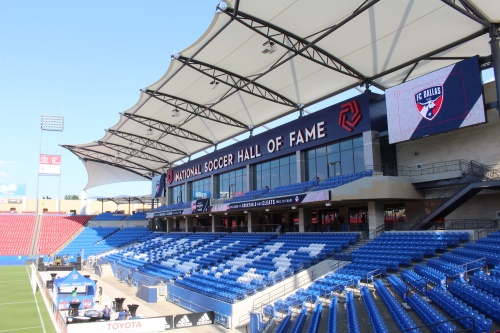 The 3,355 new seats on the south end of Toyota Stadium will be open to the public Aug. 4.

After two years of construction, FC Dallas revealed the completion of the first phase of a $55 million renovation project of Toyota Stadium on Thursday.

To kick off the opening of the new renovations, a private event was held Aug. 2 for fans and soccer players, which included an auction for soccer memorabilia. On Aug. 4, these new resources will be open to the public for the first time for a soccer game between FC Dallas and the San Jose Earthquakes at 7 p.m. It will be followed by a fireworks show.

In the second phase of the renovation project, FC Dallas will open the National Soccer Hall of Fame on the third tier of the stadium in October, which will be the first major league sports hall of fame built within a stadium, FC Dallas Media Service Director Jason Minnick said.

On Oct. 20-21, a celebratory Hall of Fame induction ceremony and concert will take place, and the National Hall of Fame Experience Club will be complete.