Mike Hamlin to take over as chief of police in Grapevine 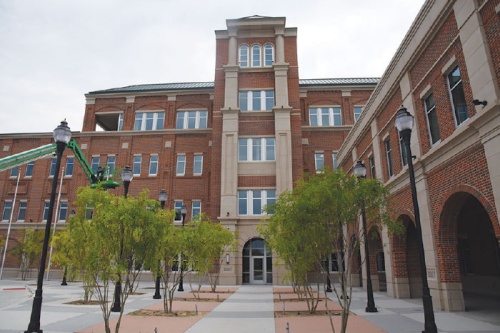 The new Grapevine Public Safety Buildingu2019s dedication ceremony was Sept. 5, with public tours operating until 7 p.m. Those in attendance included former and current city councilors as well as former and current public safety employees for the city.

Hamlin came to Grapevine in 2015 from North Richland Hills after serving 30 years as the assistant police chief there. He said what attracted him to Grapevine was the number of diverse events and activities the city participates in and how he would be able to be a part of that.

“I thought that would be a good fit, and at the same time learning a different culture, still learning a different way of doing business from a different perspective,” he said. “I’d heard a great deal about the community support, and it is truly amazing. This community, like many others, just pours out. It’s almost to the point of they don’t need a reason, they just show up on your front door with a thousand cookies or something, so it is amazing.”

Hamlin said he plans to build on the foundation of police work Salame has set up for the department.

He also said he wants people to know that just because a police chief change is taking place, the community and its businesses will not see a change in the police department’s delivery of services.

“It’s the same high-quality service that we delivered under Chief Salame; we’re going to continue to deliver that,” Hamlin said. “I told a group here the other day, I said, ‘From the end-user perspective, you should have no idea that there was a chief change, because the officers and the civilians that they’re interacting with on a day-to-day basis, because of who they are and their professionalism, they’ll continue to provide that high level of service.’”
SHARE THIS STORY