After 27 years, Grapevine’s chief of police Eddie Salame steps down 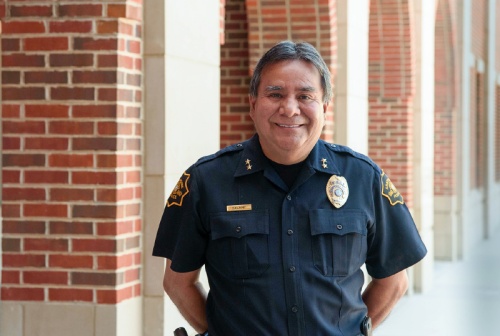 April 27 was Grapevine Police Chief Eddie Salame’s last day on the job. After 27 years with the Grapevine Police Department, 13 of those serving as chief, Salame is stepping into retirement.

“I’ve been a police officer for 34 years,” Salame said. “I’ve been told for many years that you will know when it’s time to retire, and certainly I know that it’s time. I’d rather leave on my terms, when I’m ready to leave, rather than just be here too long.”

Salame began his law-enforcement career in Fort Worth in 1984. He came to Grapevine in 1991 and said he was simply able to work up through the ranks to become chief.

“I had been assistant chief for six years and so I had worked with the chief for six years so when he announced his retirement it was a decision of do I apply for it, or do I remain assistant chief and let them bring in a new chief?” he said. “…You work through your career, and at that point I had gotten my education, I had 20 years of experience so I just felt comfortable that I could do the job given the opportunity.”

April marked several recognitions of Salame as other community leaders expressed their gratitude and appreciation for Salame’s years of service. At the April 23 Grapevine-Colleyville ISD board meeting, Superintendent Robin Ryan made a presentation to commend Salame for his leadership and said he was instrumental in several efforts, such as the Grapevine Community Outreach Center, that touched the lives of children in the community.

“The role of a police officer is not getting any easier; in fact, it’s incredibly difficult,” Ryan said. “… You sir, have made a difference.”

Salame said he plans to remain in Grapevine. He will join his wife, Margie, in her real estate business, and the two plan to spend time traveling to California.

In addition to serving as police chief, Salame is also the current president of the Grapevine Rotary Club­—whose motto is “service above self.” It is this motto that Salame said he hopes people will still associate with him and his role as chief.

He said he has viewed his role as the chief of police as an active member of the community to build relationships.

“I’ve enjoyed interacting with the citizens,” he said. “It’s a great city; there are great people here; and that’s something that I’ve always had a good time doing.”
SHARE THIS STORY