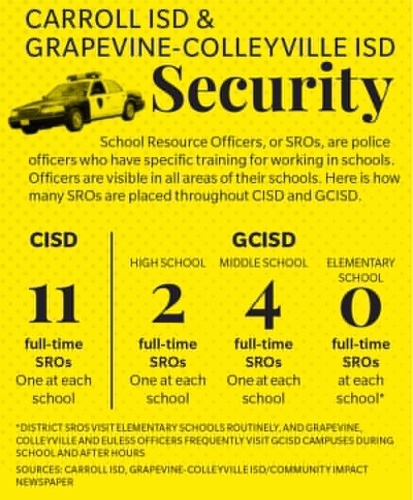 School Resource Officers, or SROs, are police officers who have specific training for working in schools.

“What people need is a conversation­­—I think what people need is transparency,” Southlake Chief of Police James Brandon said. “I think that although the police department comes to work every day constantly working on everyone’s safety … when something like [the Parkland shooting] happens, it brings up some very pointed concerns for parents.”

On March 29, city of Southlake and CISD officials met with Southlake parents to discuss school safety efforts and measures. A similar meeting was held at each campus in GCISD to discuss what measures have been taken since the Parkland shooting.

“I think you’re seeing vigilance probably more so now—paying attention to those doors and educating those students about the dangers of propping [open] a door,” Grapevine Senior Officer Jason Keller said.

Allen Smith, GCISD director of emergency management, told Community Impact Newspaper school safety and security is a constantly evolving process that will only continue to develop. He added that a new tool the district is using is a law enforcement threat assessment document, which he said allows staff members to conduct assessments as needed to determine the perceived level of a threat. The tool is used by a team of professionals to determine the level of a threat and was created for use in GCISD in the fall.

GCISD officials pointed out that relationships with the students were what the SROs did best.

“We have that relationship; that’s very important,” he said. “They are my eyes and ears.”

This relationship is something Grapevine High School Principal Dave Denning agreed is crucial for safety.

“As we talk to our kids and teachers, one of the biggest things is an open relationship with kids,” Denning said. “This is a relationship business … and that’s what’s key with Jason and Terry and those guys, they know our kids.”

Smith said the school district has six SROs assigned to GCISD middle and high schools. He said there is a districtwide emergency operations plan, as well as a campus-specific plan for each campus. These plans include security measures, such as video intercom, building access control, video cameras, Federal Emergency Management training for staff, drills, SROs at secondary schools and routine visits to elementary schools by patrol officers.

“While we don’t share the specifics about safety/security measures [with the public], yes, we use technologies to secure our schools,” Smith said. “Additionally, our students and staff participate in a series of drills known as the Standard Response Protocol. These drills are completed within the first two weeks of school and then again throughout the year.”

He added the 2016 bond program is adding secured entrances to schools that do not already have one, replacing legacy video cameras and adding exterior speakers connected to public announcement systems.

In 2012, John Terrell, the Southlake mayor at the time, created a safety task force to help keep CISD students and staff safe. This task force initiated the district’s SRO program, which now deploys a full-time officer at each campus within the school district.

“That is unusual that we have them at every campus grade level ... because a lot of districts across the nation have SROs, but they’re at the secondary campuses,” said Julie Thannum, assistant superintendent for board and community relations.

Thannum said parents and staff have reported they feel better with the trained and armed officers on campus.

“[SROs] have their vehicles parked out there, and I think it’s a great deterrent for a lot of things that we may never know could have happened with their presence there,” Thannum said.

Brandon said the district is constantly monitoring and looking for ways to improve its security.

“The way specifically I look at it is if there’s something that we can do today to prevent a problem tomorrow or five years from now or 10 years from now, then we’ll do it today,” Brandon said.

The district is working on a Resiliency Project, where a committee of students and staff work together to help students overcome challenges.

“We just want to teach kids to overcome their adversities, the stresses of being in a high-performing school district, that type of thing,” Thannum said. “We have a four-part action plan, where we tell kids if you see something or hear something then say something, and then here are some steps that you can actually act.”

The Resiliency Project will include a Parent University in fall 2018 with speakers and breakout sessions for parents regarding issues of self-care and mental wellness, health and nutrition, bully prevention and kindness, conflict resolution and coping skills, self-defense, personal safety, drug and alcohol education as well as suicide prevention.

The CISD 2017 bond program will also include some changes in safety, Thannum said.

“At Old Union and Rockenbaugh [elementary schools], we’ll move those offices to the front [with security vestibules], and we’re looking at bullet-resistant materials and adding more surveillance cameras,” Thannum said.

Thannum said the 2012 task force also created the Operation #SAFEdragon initiative. Operation #SAFEdragon is a response plan put into place that includes a number of initiatives aimed at fortifying buildings, performing regular training, ongoing communication and increasing student, staff and public awareness and safety announcements and messages. The district’s program interaction can be found on its social media pages with the hashtag.

“It’s just a reminder to our parents that we do have a program in place,” Thannum said.

She said she believes schools are some of the safest places for students.

“Because we continue to train, we continue to look at every measure we can, and I think in many cases, our SROs, they put their lives on the line,” Thannum said. “And we have a great response rate, great communication, great tactical planning—we’ve done about everything we need to do.”
SHARE THIS STORY