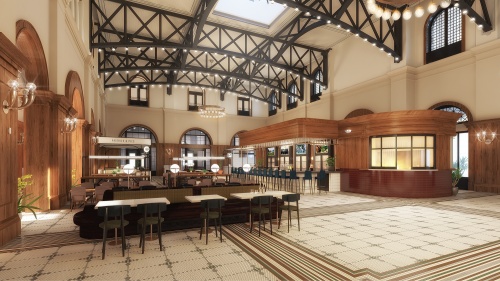 This rendering shows the theme of Harvest Hallu2019s Great Hall.

Grapevine’s Harvest Hall will be the latest in a series of food hall openings, affirming the prominence of this trend across the region.

Harvest Hall is planned to open next summer at the northeast corner of Dallas Road and Main Street in Grapevine. Guests will be able to sample fares from vendors in an atmosphere evoking the nostalgia of a glamorous train station.

Working alongside Santora is Warren Stowe, the Hall’s director of marketing and events. Together, they are responsible for activating the food hall.

“Becoming that premier destination of Grapevine is most definitely top of the list for us,” Stowe said, adding that their goal is to also bring seamless high-quality service from the hotel to the food hall.

The food hall will have space for six food kitchens in addition to its dedicated bar and coffee areas and will be divided into three parts: the North Hall, the South Hall and the Great Hall, each with its own design.

“You can expect a lot of different things from Harvest Hall,” Stowe said.  “The way that we’re setting up the food hall … is so that you can really have a different experience every time you go.”

The South Hall will be distinct from the other two sections of the hall since it will have no kitchens. Because of this, Santora said, the space becomes more flexible. It could be used as a full-service restaurant where Coury Hospitality workers serve food from the vendors.

“It’s more of a restaurant experience in this food hall environment, which we think would be really fun and interesting,” Santora said.

Serving as an additional “demand generator,” Santora said, is Hotel Vin from Marriott’s Autograph collection. The Hotel Vin will occupy the same building as Harvest Hall.

“The hotel really has about 15,000 square feet of indoor-outdoor event space for only 120 rooms,” Santora said. “We can actually go after social events and weddings … because we have an abundance of space.”

Food halls have emerged as a popular dining choice in the Dallas-Fort Worth area in recent years. Experts point to Plano’s Legacy Hall as the area’s first.

“We’ve been seeing them in markets like New York City, Chicago [and] Denver,” said Elizabeth Herman, a retail associate with real estate and investment firm CBRE. “And that’s what caused the impetus for this explosion of food halls that we’re seeing.”

Consulting firm Cushman & Wakefield released a report in May estimating the number of food halls in the United States will reach 450 by the end of 2020.

Food halls are attractive to real estate brokers and chefs alike, the report said, as they typically have fewer operating expenses than traditional restaurants and offer a versatile dining environment.

That is one of the reasons food halls work, said Kevin Lillis, CEO of Hospitality Alliance, the developer of the Crockett Row food hall that opened in December 2018 in Fort Worth.

“You can bring better brands than you normally could because you have such an attractive economic proposition for [vendors],” Lillis said. “We’re doing the labor … so someone gets to dip their toe in the water in this market for a very low buy-in.”

Harvest Hall intends to fit right into this model. The price for vendors includes rent and utilities; refrigeration and dry storage shelving; all customer dishware; central dishwashing; and all delivery dock services.

“The way that they’re setting it up for food vendors is amazing,” she said. “If I hadn’t already had a restaurant, I think that would be a great way to get into the restaurant industry.”

Newman said she is considering applying for a vendor position, but she also sees the benefits for other businesses along Grapevine’s Main Street.

“Even if people are coming initially for [the food hall], I still think that they’ll explore Main Street,” she said. “Myself and the other great restaurants that are here—you always benefit from other successful businesses.”

Beyond Harvest Hall, there are plans for food halls in other cities.

Construction began in February on Oak St. Food & Brew in Roanoke. The food hall there will span 11,400 square feet and feature eight restaurants, a brewery, and indoor and outdoor seating.

“We thought ... [we could] bring different venues in and have a little bit more reasonably priced menus for lunches,” owner Irene Dancer said.

Still to come is the planned food hall at Carillon Parc in Southlake. The Southlake City Council approved plans in July 2018 for the European-style development, which will include a food hall concept. No opening date has been set.

In addition, Lillis said a new food hall is expected to open in Dallas at the AT&T World Headquarters next year.

“Food halls are much more than a trend,” said David Daniels, senior vice president of marketing for Legacy Hall’s parent company, Food Hall Co. “It’s an evolution in terms of the way people dine, the way people entertain and the way people socialize.”