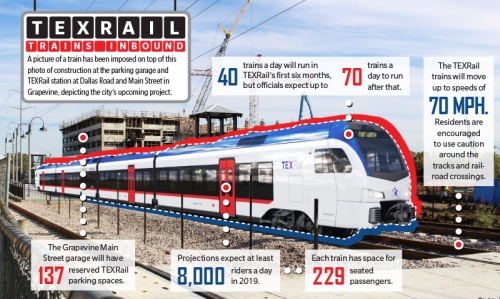 A picture of a train has been imposed on top of this photo of construction at the parking garage and TEXRail station at Dallas Road and Main Street in Grapevine, depicting the cityu2019s upcoming project.

Editor's note: Trinity Metro extended the time for its free TEXRail service, and this article has been edited to reflect that extension.

After 13 years of discussion, 29 months of construction and almost as many months of testing, TEXRail is nearly ready for passengers. All nine TEXRail stations across northeast Tarrant County will begin operations Jan. 5, including the Grapevine station at Dallas Road and Main Street.

TEXRail is a new 27-mile commuter rail project that will extend from downtown Fort Worth through Grapevine and Colleyville and into Terminal B at the Dallas/Fort Worth International Airport. Colleyville will not have a TEXRail station.

Passengers can ride TEXRail at no charge during the month of January, or from Jan. 5-Jan.31.

“It will provide the general public another exciting mode of transit from a destination standpoint as well as, of course, just a normal day-to-day ability to get to work,” Grapevine City Manager Bruno Rumbelow said.

The total TEXRail project costs $1.03 billion and is divided between federal and local funds, including money from the North Central Texas Council of Governments and sales tax.

Bob Baulsir, senior vice president of Trinity Metro, said the project has been in the planning stages throughout Tarrant County since 2005, and Trinity Metro officially began constructing TEXRail in 2016. He said the TEXRail trains will “raise the bar” for trains everywhere.

“This is going to be a premium ride,” Baulsir said. “We really see this as the service that everybody else in the state of Texas is going to strive to meet.”

Grapevine’s TEXRail station is at the corner of Dallas Road and Main Street. Rumbelow said there are two other stations in the Grapevine city limits, but those will be operated by
DFW Airport.

Grapevine is building a parking garage that will be available on a limited basis when the rail service debuts in January as construction continues. Rumbelow said additional parking will be made available to all TEXRail passengers until the garage becomes fully operational in April. It will be free for TEXRail users.

On Feb. 1 passengers will be able to step up to the TEXRail station platform and purchase tickets from an electronic kiosk. Following the two-week initiation window, tickets are $2.50 for a single ride or $5 for a day pass that will cover all bus and rail travel in Tarrant County for the day it was purchased.

Another program called EasyRide will benefit companies seeking to bring employees to the office via the train, as employers can purchase tickets at a 25 percent discount on monthly and annual passes, Baulsir said.

Representatives of EasyRide recently met with a group of Grapevine business leaders to share information about discounted fares for participants.

“They were intrigued by the program and asked an array of questions about EasyRide,” Linda Thornton, Trinity Metro vice president of marketing and communications, said in a statement. “We’ve all seen the recent news reports about the need for more workers in Grapevine. TEXRail could be the answer for bringing a larger workforce from the region to Grapevine.”

Rumbelow said the city also has plans to expand the Grapevine Visitors Shuttle service, operated by the Grapevine Convention and Visitors Bureau. The shuttle takes guests to key destinations, such as Grapevine Mills and the Gaylord Texan Resort. More shuttles will be added, and the length of the shuttle operations will extend, Rumbelow said. More destinations may be added depending on the demand from the TEXRail trains.

The trains can get up to speeds of 70 miles an hour. The trains are quiet, Baulsir said, so motorists should pay attention to crossing gates.

“We’ll start out low with 40 trains a day, and then as we grow up in the first six months we’ll probably bump it up to more than 70 trains a day going through Grapevine, so we want folks that live along the line and crossing it to be aware,” Baulsir said.

Eight thousand riders a day are predicted to use the service in its first year, and by 2035 that number is expected to increase to nearly 14,000 daily. Grapevine Mayor William D. Tate said he expects the trains to be more successful than projections show.

“People still have a love affair with trains,” Tate said. “A lot of people are looking forward to just riding it as an excursion.”

Now many Grapevine-based festivals, including Christmas activities and GrapeFest, will be accessible to more people than ever before, Baulsir said.

Some Grapevine residents are looking forward to the train operations as well. Jessica Cruz, who owns the Texas General Store on Main Street, said she is excited to have another means of transportation for Grapevine guests.

“I hope that it will encourage people to venture out of whatever their comfort zone may be ... and let them experience other areas of the metroplex,” Cruz said. “Maybe people from outside of Grapevine will come experience [the city] that haven’t before. “

Tate pointed to the early trains of the 1800s and how they changed the cities they came to and brought economic development to them. He said he hopes history will repeat itself for Grapevine.

“I think [the TEXRail trains] are a great opportunity for us and for our community,” Tate said. “I think those that don’t have it sooner or later will want to have it.”

Colleyville had the option to add a TEXRail station but opted not to participate. Mayor Richard Newton said the city has no intention of changing its stance.

“[The trains] just didn’t fit in with what Colleyville was about,” Newton said. “Which is fine. Every city has their own value system for what’s important to them, and Colleyville is fairly unique in this regard. We’ve always been this way, in terms of high quality, low density. We’re doing fine.”


Plans to create a destination

Grapevine plans to use the Main Street station as a tool for developing the surrounding area. Once complete, the Grapevine Main project will include a boutique hotel, a parking garage with 550 total spaces, a grand central station attraction with an observation tower and a community plaza.

“You have to have things that keep [people] coming back and make it an exciting, community-type of environment, and we’ll do that,” Rumbelow said. “A lot of background has been put into what could that be, what will activate it and make it a place where it becomes a central community gathering space. … The whole thing will be powerful once it’s done.”

In addition to the plans for the Grapevine Main project, connectivity to the Dallas-Fort Worth area is expected to increase overall. After taking TEXRail to the airport’s Terminal B, riders can transfer to the DART Orange Line that connects to Parker Road in Plano. Switching lines from there allows travelers access to Dallas.

Tate said it is no wonder he has only heard excitement from his residents regarding the train.

“This will be something that not only our own people but our guests will be able to enjoy, and it will just add to the ambiance of the downtown area,” he said. “I think it’s a giant leap forward for us.”