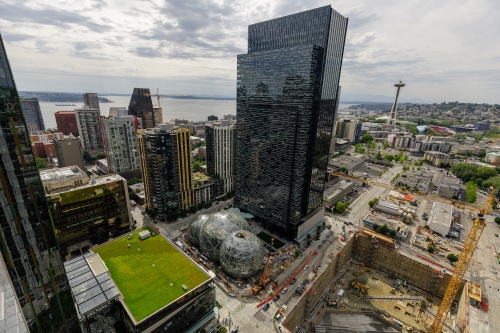 The city of Grapevine has collaborated with the Dallas/Fort Worth International Airport to submit a site proposal for the second North American headquarters of Amazon.com Inc.

In collaborating with the airport, Grapevine has offered a site that city officials hope will attract the online shopping and technology giant, or at the very least demonstrate that it is able to host a massive corporate
headquarters. Grapevine’s Economic Development Director Bob Farley said the city’s proposal was included in the Dallas Regional Chamber’s response to Amazon’s call for proposals.

The proposed site is 800 acres of undeveloped DFW Airport land located in Grapevine city limits. It is bordered by SH 26, SH 121 and SH 114.

“It’s a really good site,” Farley said. “If they’re interested in Dallas, it has a lot of attributes.”

When submitting its requests for proposals, Amazon had a checklist of qualities the ideal location should have—requirements Tate said Grapevine meets. In addition, he said, if Grapevine is chosen, the entire Dallas-Fort Worth area, not just Grapevine, would reap the benefits the tech giant would bring with it.

“It is probably a long shot when you are competing with the whole world, but … I do think Grapevine, together with the airport, can offer a site that is a strong contender,” Tate said.

On Oct. 24, Amazon reported 238 cities across the country submitted proposals to have what the company is calling HQ2 built in their cities. What cities were able to take into consideration was a list of stipulations Amazon said HQ2’s site should have.

Farley said what makes Grapevine’s proposal unique among some other North Texas cities is that the city is able to offer public transportation. By late 2018 the city will have a new TEXRail system taking travelers from downtown Grapevine to the airport. From the airport, these travelers can either take the Dallas Area Rapid Transit transportation system to another location, or hop on one of the 1,850 flights arriving and departing the airport every day.

“[Grapevine] has a public transportation piece that’s pretty interesting, given that there’s [TEXRail] service into that [proposed Amazon] site as well,” Farley said.

Meeting these stipulations could make the city a strong contender in the region, Tate said.

“I don’t think we’re weak in any of these areas,” Tate said. “I think a lot of cities are not going to meet all the criteria. We’ve got a very attractive proposal, I think, in conjunction with DFW Airport and Dallas-Fort Worth.”

Currently Amazon has warehouses located close to the proposed site the airport is offering. Tate said these structures do not create many jobs or generate much sales tax revenue.

But that could all change with HQ2.

“There is a sales tax implication,” Farley said. “The exact amount of that we’d have to determine based on a couple of things, but obviously when you get that many people working in a given location, they are going to spend some money.”

Most of that sales tax revenue would be an indirect result of Amazon, Farley said. Amazon’s primary sales tax comes in from its shipments, so the city would be counting on its employees to live, work and shop in Grapevine.

In its request for proposal, Amazon said HQ2 would bring about 52,000 employees to the chosen area, which is more than the city’s current population of 51,000. These employees would have an average salary of $100,000. Farley said Grapevine could handle the increased population and traffic  over time.

“I don’t know that we would be able to accommodate everybody tomorrow, but … the build-out time that they’re talking about is 10-15 years, and that gives you plenty of time to absorb employees and re-gear things if you need to from a service standpoint,” Farley said.

Grapevine is home to other company headquarters, such as the Kubota Tractor Corporation and GameStop Corp., and is only about 20 miles from the headquarters of Toyota, Cinemark Theaters, Frito-Lay and J.C. Penney Company Inc., all in Plano. It is these large developments that help give the area an international identity, Farley said.

“Any of these national headquarters, that’s been a big sweet spot for the Dallas region,” he said. “And obviously the more of those [headquarters] you get the more pivotal your market becomes as a business.”

Darren Grubb with the Dallas Regional Chamber said these are economic benefits that would be felt if any of Grapevine’s neighboring cities also pitching for Amazon are chosen. Among them are McKinney, Plano and Frisco. Although Southlake and Colleyville are not pitching individual sites to Amazon, city representatives have released statements voicing their support for HQ2 to choose the North Dallas area.

“While Southlake is not actively pursuing Amazon for their second headquarters, Northern Tarrant County is the ideal location for this expansion, and we support regional efforts to recruit them,” Southlake Assistant City Manager Alison Ortowski said in a statement. “This region is thriving and is the perfect place for Amazon and its workers to call home.”

Others, however, are not so convinced that Grapevine is equipped to house a major corporate headquarters like Amazon.

“I never thought I’d say I’m tired of jobs coming to Texas, but I’m starting to feel that way,” Keller Williams Realtor Alan Eoff said. “I’m a Realtor, and I feel sad for my buyers who work two jobs and don’t have any selection of homes to buy because they’ve gone up in value so much.”

Grapevine resident Sabrina McCracken said she also had concerns with the number of people and traffic HQ2 would bring.

“It’s likely to put a strain on an already tight housing market, which drives up prices,” she said. “That could be great for people looking to sell, but for those of us who love living here, it could mean having to leave the area when it’s time to grow the family.”

Even if Grapevine is not chosen as Amazon’s headquarters, Tate said there could still be benefits for the city. If Grapevine was named a finalist, the name recognition could put Grapevine on the radar for other major headquarter relocation opportunities.

“They can look at our site and say, ‘Wow, we’d like to beat Amazon [to that site],’” Tate said. “[Other corporate companies can] be looking over their shoulder at our really great site.”

If Amazon chooses the Grapevine site, Tate said the city would enter into a revenue-sharing agreement with Dallas and Fort Worth.

Since applications were turned in Oct. 19, Amazon has tweeted that it will “review” applications and will have an announcement regarding HQ2 in 2018.

“They’re a company that’s been founded and succeeded on imagination and creativity, which is something that we attribute to our own success,” Tate said. “Grapevine’s such a good match from that standpoint.”