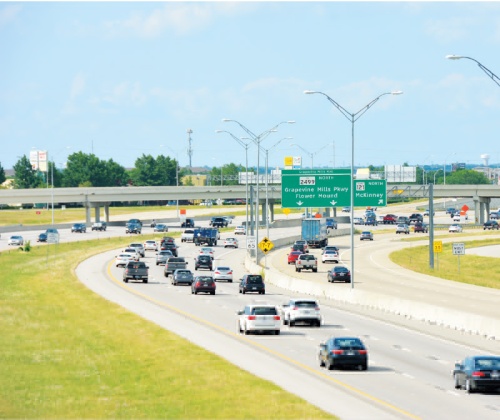 The project is expected to be complete in 2022.

Tarrant County Commissioner Gary Fickes, whose precinct includes Grapevine, Colleyville and Southlake, said this project is a big piece for Grapevine drivers to easily access the highway and travel in all directions.

“This will help everybody,” he said. “In the afternoons and in the mornings with traffic backed up on [SH] 114 trying to go north on [SH] 121, ... or people going into the airport, it’s just a chokepoint that when it gets full it’s thousands of cars at any one time.”

The upcoming interchange project and several other unaddressed projects were originally part of the 2010 DFW Connector project, which completed work in 2014 and overhauled and widened SH 114 and SH 121. The projects were delayed when only $1 billion was made available for the $1.6 billion Connector.

Bugg said the project will improve mobility and safety for many drivers who travel through the SH 121 bottleneck between I-635 and FM 2499.

Fickes said funding for the project came with restrictions specific to free lanes. He said no toll lanes will be developed with this transportation project.

Fickes said once this project is complete in 2022, it will probably be the last major transportation project in Tarrant County for some time.

However, several area residents said they are unhappy about having to endure four more years of construction after continuous work since 2010 on SH 121, which many motorists use to reach Dallas.

One of those residents is Henry Lambert of Colleyville, who drives this route to work.

“I travel that every day. I thought the never-ending construction nightmare was finally at an end—guess not,” he said.

SH 121 between Stars and Stripes Way in Grapevine and the Business SH 121 split in Lewisville was recently widened to 10 lanes. The project began in March 2014 and was substantially completed in January of this year. Businesses in this area told Community Impact Newspaper in August that construction had hurt them during this time, but Grapevine Public Works Director Bryan Beck said he anticipated the construction this time to have a more minimal effect.

“This particular segment that they’re going to be working on, I don’t think the widening is as extensive as the original connector was, which I think should facilitate quicker construction,” he said.

Grapevine Economic Development Director Bob Farley said this project will help businesses in the long run, as some businesses in this area did not have easy entry points.

“It’ll actually help bring more accessibility to that side of town,” he said. “… At the end of the day you’re left with better accessibility and greater flow—that’s another thing, is you’ve got more people able to get in and around there now than you’ve had at any point in the past. So it’ll take a little bit of pain to get the
long-term value.”

“It makes a big difference,” Beck said. “… I think TxDOT continues to get better at being mindful of how their construction impacts the local communities.”

With 119,000 vehicles per day traveling on this segment of SH 121, TxDOT spokesperson Michael Peters said drivers will more than likely be looking for alternate routes to get to work or home.

TxDOT does not have any suggested alternate routes to avoid construction, Peters said, but the state agency will limit its impact as much as possible on drivers.

“There will be lane closures necessary for construction,” he said. “To minimize the impact to the traveling public, lane closures will not be scheduled during commute times, but instead will be scheduled at night or off-peak travel times. When necessary, traffic will be detoured to an
alternate route.”