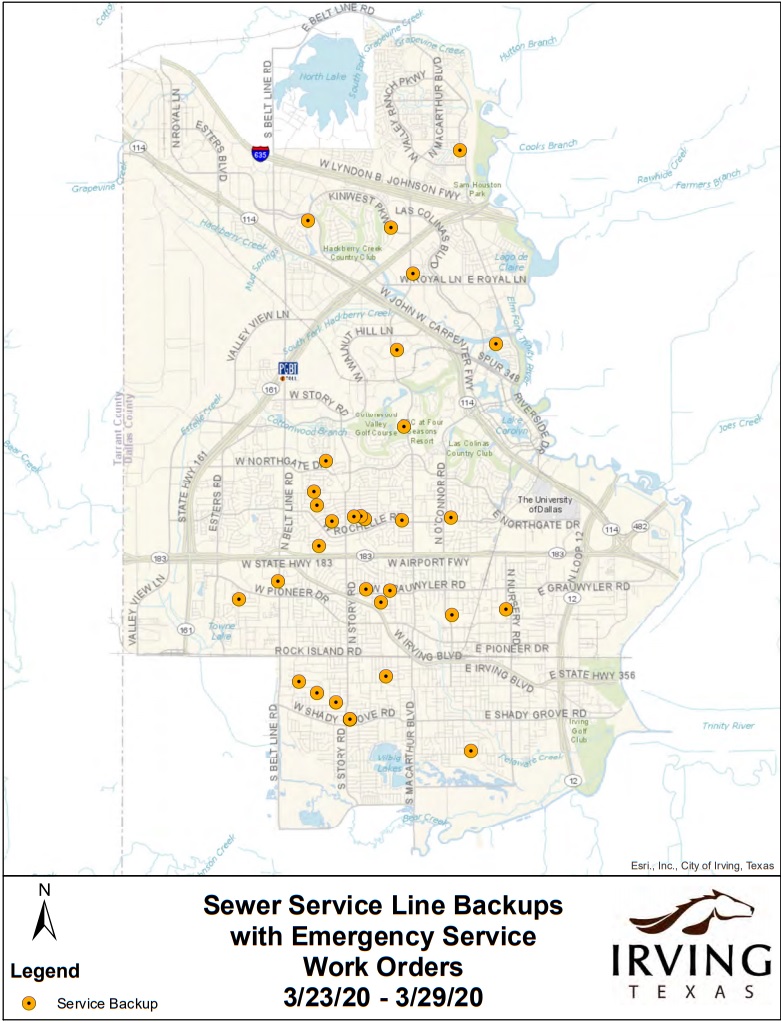 As Irving residents shelter in place, city officials are reporting a steep uptick in sewage-related calls.

Todd Reck, the city's water utilities director, said he is receiving calls from residents with blockages caused by the buildup of non-flushable products.

"The only thing you should ever put down the toilet is toilet paper," Reck said.

Products that should not be flushed include baby wipes, paper towels, disinfecting wipes and other fibers that are not toilet paper.

The flushing of alternative products could be related to short supply of bathroom tissues in many area stores. The shortage prompted Dallas County Judge Clay Jenkins to limit the amount people could buy as part of his executive orders related to the coronavirus outbreak.

The increased number of sewage-related calls in Irving is placing stress on an already thinned team, Reck said. A map of the work orders for sewage backups from March 23-29 shows dozens spread throughout the city.

"It's pulling the limited number of crews that we have," he said. "[They] are having to race out and be reactive and responsive to some of these calls we typically wouldn't have to respond to."

If residents experience sewage backup issues in their homes, the city will determine the location of the backup, Reck said. If it's within the city's right-of-way, the city will resolve the issue. If the blockage is within the residents' property, they will have to foot the bill.

Ultimately, Reck said, it is most important for residents to dispose only toilet paper in the toilet.

"The critical thing is don't use your toilet as a trash can," he said. "All these products that are available now: baby wipes, bathroom wipes, facial cosmetic wipes, personal hygiene wipes, disinfecting wipes or cleaning wipes, ... All those items really need to go in the waste basket and not down the toilet."

The city posted the following message on its Facebook page on March 28: