Road work has included major reconstruction projects on Freeport Parkway and Parkway Boulevard. Both of those projects are expected to be complete this spring, according to Coppell Public Works Director Kent Collins

"The new eastbound lanes are open to traffic, and we're working hard on the westbound lanes," he said in a city-prepared video presentation. "We're working on a side path for pedestrians and bicycles, and a lot of landscaping that's going to go in—we expect that to wrap up in the spring."

"We only have so many lanes of traffic," she said. "If we add one more, guess what? They just fill ... up. ... Figuring out ways to help that traffic move through town—that's a big deal."

Recent water work has included reconstructing the main water tower and replacing 13,400 water meters throughout the city, according to city staff.

The technology also provides residents with leak alerts from the city more quickly, she said.

The opening of a connection into Irving's Campion Trail was one of the city's recreation highlights of 2019, according to Park Project Manager John Elias.

"Not only does it add 2.2 miles to our trail system, but it also gives our community the opportunity to ride the Campion Trail, which is an additional 19 miles," Elias said in the presentation. "That basically takes you from Coppell all the way through Las Colinas and almost to Grand Prairie.

A new Coppell shopping center is opening soon at North Coppell Road and Sandy Lake Road, according to city records. 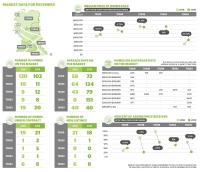