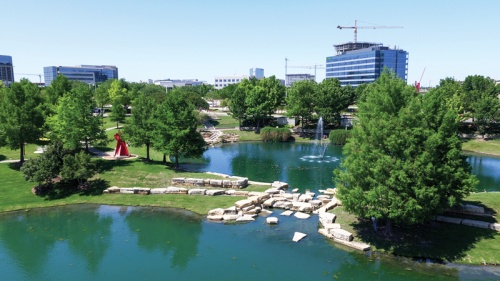 Hall Park has grown to 17 buildings in the past 20 years with more planned for the future.

In 1997 construction began on the first building at what was then known as Hall Office Park. Twenty years later, the 162-acre office park has been renamed Hall Park, construction is almost complete on the development’s 17th building and the developer is preparing for an expansion.

Owner and developer Craig Hall and his team are working on a master plan that could nearly triple the office park’s square footage and add residential, retail and entertainment components.

“What we’re trying to do is step up our game to make [Hall Park] a little bit more live, work and play,” Hall said. “It’s improving what we think is pretty good so far and figuring out how we can make it better.”

Hall and his team are receiving feedback from the community, city staff and experts. The master plan could be complete within six months.

Vision for expansion
Hall said the Frisco area just north of SH 121 was mostly undeveloped 20 years ago. Now it is one of the fastest-growing areas in North Texas.

“[Hall Park] has always been evolving,” Hall said. “The difference now is just that we’re kind of taking our breath. We’ve built 17 buildings and now we’re looking at where we are and where we’re going, and it seems appropriate in light of the development of Legacy West and The Star in Frisco.”

Hall said the plan would be to repurpose current parking lots and parking structures to add more space.

“What we would do is shrink the size of the actual parking area and construct a five- to six-story parking garage with an office building next to it,” Hall said. “This will significantly increase the space that we currently have.”

Hall said he wants to better the park’s open space to encourage visitors to go to the park daily rather than just during special events.

Though Hall Park will always predominantly be focused on office space, Hall said he believes the national trend of people living close to where they work is something that needs to be incorporated. He said incorporating residential space would also help ease traffic congestion in Frisco.

“A performing arts center is just an idea that is defined by its users, so we can’t go in blindly or use an arbitrary number or listen to the loudest voices; we have to do the study,” Meinershagen said.

Hall said he and his team have identified two potential areas within the park for the center. However, if the study finds that another location within the city is better suited for a performing arts center, Hall said he would agree with those findings.

Frisco City Council created an art subcommittee to put together parameters as to what investment the city can make with available bond money. In May 2015, Frisco voters approved a bond package that included $10 million for a performing arts center.

Future Outlook
The zoning at Hall Park allows for offices, hotels and restaurants. The zoning also allows a maximum building height of 25 stories.

There is no residential use allowed under the current zoning. Frisco Development Services Director John Lettelleir said in order for residential to be allowed, Hall Park would have to be rezoned.

The zoning request would come before the Frisco Planning and Zoning Commission for approval, and then Frisco City Council for a final vote. Because Hall Park is looking to change its site plans, Lettelleir said the best route is to update the current zoning.

Hall Park houses about 180 companies, and 8,000 people work in the park. Some of the major business tenants in Hall Park include Jamba Juice, the National Breast Cancer Foundation, Randstad Technologies and the University of North Texas New College at Frisco.

Planning and Zoning Commissioner John Kendall is the CEO of Osky Blue, a marketing consultant firm located at Hall Park. Kendall and the other commissioners received a preview of the potential future plans for Hall Park during a work session in September.

“I’m impressed at how open-minded [Hall Group] has been, and I know it’s in early stages but it seems like they really care about what the tenant wants and getting feedback on supply and demand,” Kendall said. “I love that this area is growing—it’s better than seeing vacant buildings.”

Frisco Mayor Jeff Cheney said he and City Council recognize the change in how commercial developments are now being designed.

“The direction that well-designed commercial developments are going to have is that work, live, play concept, and that’s certainly what [Hall] sees as well,” Cheney said. “He’s already added some restaurants and retail to give those amenities that the workforce is looking for. He also recognizes that the employers of today certainly want high-quality housing options for their employees that are walkable to the office.”

Hall said the next phase of development at Hall Park will take about 25 years to construct.

“I look at this as a long-term vision and something that I’m doing that transcends profit and is about doing something of pride and good for the community,” Hall said.