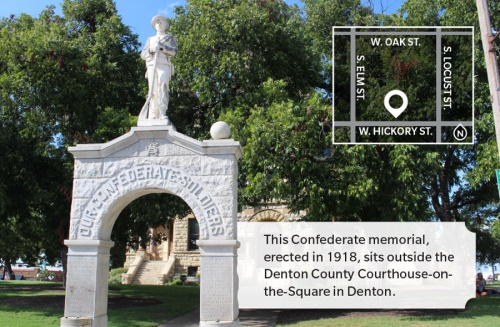 Denton County commissioners are exploring plans to add historical context to the Confederate memorial stationed outside the Courthouse-on-the-Square.

Denton County commissioners are exploring plans to add historical context to the Confederate memorial stationed outside the Courthouse-on-the-Square by adding new, informational structures nearby.

In August, commissioners created an art committee to flesh out the details of a proposal to erect a new granite memorial, a bronze sculpture and two digital kiosks near the existing Confederate memorial.

Debate over the Confederate memorial recently came to a head after years of discussion over its fate. Similar conversations are happening around the country. Some people say the history of such monuments should be preserved, while others believe they glorify slavery. Earlier this year, some Texas lawmakers wrestled with a proposal to protect Confederate monuments and memorials across the state. The bill did not make it out of committee.

Denton County’s seven-member art committee will choose three to five artists to create renderings of the proposed structures and will be responsible for collecting public input before selecting an artist. The committee has also been tasked with drafting a statement denouncing slavery to be inscribed on the proposed granite memorial. In addition, the committee will compile information about the history of slavery in Denton County to be featured on the interactive, digital kiosks.

While the county is dedicating a considerable amount of time to the effort, commissioners have yet to take any formal action to make additions to the existing memorial. They will first have to get permission from the Texas Historical Commission as the former courthouse was designated a Texas Historic Landmark in 1970.

How the conversation started

The memorial at the center of discussion was commissioned by the Daughters of the Confederacy and erected in 1918. A statue of a soldier stands atop the stone arch etched with the words “Our Confederate Soldiers.”

For years, residents have had split opinions about whether the memorial should remain outside of the Courthouse-on-the-Square or be moved to a museum or a historical park.

In 2017, the Commissioners Court created an advisory committee of 15 community members to examine the implications of the memorial’s location and to make a recommendation for its future.

After months of contentious conversations, including public input, the group unanimously recommended the memorial remain in its current location.

“After we wrestled and wrestled, we realized we had to come to some kind of conclusion, and the vote, initially, was 10 to keep it and five to move it,” said Baines, who also served as the chair of the advisory committee. “But the commissioners said, ‘OK, if you guys want us to honor your recommendations, we need either a supermajority or unanimity.’”

The unanimous decision came on the condition that historical context and a denouncement of slavery be added near the memorial.

“In America, we don’t need to just honor the dead Confederate soldiers. We need to honor the soldiers of all the wars,” Baines said. “Another part is to tell the real story about slavery—no more whitewashing. No more half-truths. Let’s get into all of the ... awful things that were related to slavery so people can see how the slaves were transported here in the ships and the inhumane treatment that occurred on the plantations. All of that story has to be told.”

Denton County resident Willie Hudspeth has been protesting the location of the memorial for more than 20 years.

Hudspeth served on the advisory committee and is  president of the Denton County NAACP. He said although he voted with the group to recommend the memorial stay at the former courthouse, he believes it would be more appropriate if it were moved to a museum or a historical park.

Hudspeth said he voted with the group because he believed that the chances of the Commissioners Court deciding to move the memorial were low. He said if he helped the group make a unanimous recommendation, he thought there would be a greater chance that the court would move to at least add historical context. “If you think about it, what is lost by moving it to another location?” Hudspeth said. “It’s the honorable position of it being outside the courthouse. That’s all. It says the words, ‘For our Confederate soldiers.’ You have to ask—who is the ‘we’ in that statement?”

Baines said it is important the community moves forward by not only acknowledging the truth of the past but also by answering questions about the future.

“As a county, where are we headed? What are we going to be? Who are we? What’s our identity? What we want the world to know about us today?” Baines said.

Mitchell said she feels satisfied with the decision to add historic context to the memorial and is looking forward to getting to work on the new committee.

“We’re going to make sure the rest of the story is told,” Mitchell said.