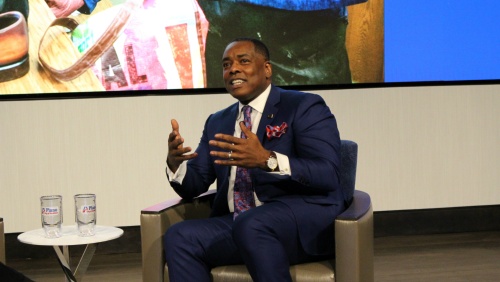 Mayor Harry LaRosiliere discusses development and transportation at the Plano State of the City address on Feb. 7.

Plano’s mayor said the former Electronic Data Systems office building in the city's Legacy business corridor is on the verge of redevelopment, listing the property alongside several other prominent projects on the horizon.

“There’s that old EDS [building], and now that’s ripe for redevelopment,” Plano Mayor Harry LaRosiliere said Feb. 7 at his annual State of the City event. “We have interest, and they are ready.”

The property is one of several projects Plano Mayor Harry LaRosiliere outlined Feb. 7 as candidates for the next frontier of Plano development, including a $1 billion effort to overhaul Plano’s Collin Creek Mall and early plans to promote new housing and restaurant development in the city’s eastern Oak Point area.

The 98-acre property sold recently to Dallas-based Highland Capital, according to deed records filed in December with Collin County.

The mayor’s full comments are below, courtesy of the city of Plano Facebook page.