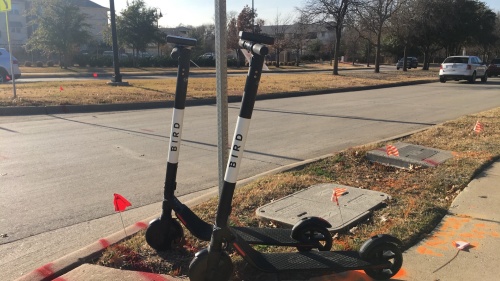 Bird scooters will be removed in Frisco starting next week.

Frisco is saying bye-bye to Bird Scooters, which has three days to remove 200 rental scooters dropped throughout the city without permission.

The electric scooter rental company launched its fleet in Frisco on Dec. 5 without consulting with city officials.

Frisco City Council called a special meeting on Friday, Dec. 14, to decide how to proceed.

"While we like to be innovators and scooters may fit into our mobility plan, their execution was not to our standards," Frisco Mayor Jeff Cheney said in a Facebook post after the meeting.

City council members and staff said they have already received complaints from residents and businesses about the scooters. Some said the scooters were a tripping hazard on the sidewalks. Others were concerned about under-age riders and clutter along the city’s right-of-ways.

The city of Frisco has no ordinances regulating electronic scooters.

During the meeting, council members asked the representative from Bird why the company did not consult with the city prior to dropping off its fleet. The council said they thought that would have been helpful.

Blanca Laborde, Bird's Senior Manager of Government Relations, did not give a clear answer. She said the company does a legal analysis on cities and had identified Frisco as a potential good market for scooters.

Bird's operations are similar to other scooter-sharing programs. Riders download the Bird app on their mobile devices to locate and unlock the scooters. Bird charges $1 to unlock a scooter and 15 cents per minute to ride them.

“I do think there is a use for scooters here," council member Will Sowell said. "I do believe that, especially as we mature as a city and connecting mixed-use areas. Unfortunately, the business model used, I think, has burned an incredible amount of goodwill with the residents of the city.”

All council members stated they were not interested in the trial and error approach that Bird used.

Deputy city manager Henry Hill told Laborde during the meeting that if Bird does not remove its scooters by 8 a.m. Monday, Dec. 17, the city's code enforcement staff will go out and remove all the scooters themselves.

Laborde said she would consult with the company's leadership team.

Council will hold a special meeting at 5 p.m. Dec. 18 to consider a moratorium that would temporarily prohibit the use of Bird scooters until the proper ordinances are in place. City staff will work to draft up an ordinance to bring before council at a later date that would regulate scooters.

“Council has an interest in exploring them as a mobility solution," Cheney said. "We just want to make sure it is executed properly ... how we can make these work for our residents and our city.”