Experts say homeless census shows change, but may not be full picture 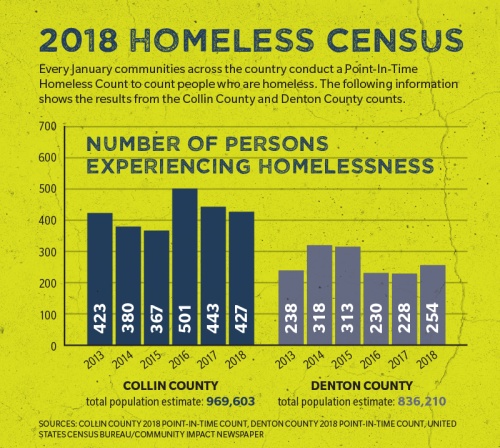 Every January, communities across the country conduct a count, called the Point-In-Time Homeless Count,
of people who are homeless. Both Collin and Denton counties conducted the volunteer-driven count Jan. 25, but the numbers may not be an accurate depiction.

Christine Ortega, vice president of the Collin County Homeless Coalition, said while the PIT count report can give a brief overview, it is not a true representation of homelessness in the county.

The PIT census provides a snapshot of homelessness in communities across the country for one night. The U.S. Department of Housing and Urban Development, or HUD, requires communities that are applying for funding to serve the homeless to count the unsheltered and sheltered homeless on one night in January.

Ortega said most of the methodologies used by HUD miss unsheltered homeless people.

Though Collin County did see a decrease from the last year’s census, Ortega said she believes the number is higher. For example, 254 people were counted in Denton County during the PIT census, but 659 people are identified as needing either short-term or long-term supportive housing assistance in the county.

In the Collin County report, the coalition also included school district data. Each school district keeps data throughout the year of how many students are experiencing homelessness. The coalition, however, cannot send this data to HUD because it was not collected during the PIT census.

Ortega said the coalition uses the ISDs' data to help the cities and community partners have a better understanding of homelessness in their communities.

The National Law Center on Homelessness & Poverty put out a report last year that explains how the HUD PIT count underestimates the homelessness crisis in America.

According to the report, the PIT counts fail to account for the transitory nature of homelessness and, as a result, presents a misleading picture of the crisis. The report also states that annual data is better for tracking the movement of people in and out of homelessness over time.

The center’s report showed a study done in 2001 using administrative data collected from homeless service providers that estimated that the annual number of homeless individuals is 2.5 to 10.2 times greater than that of the PIT count.

“All the [Denton County] agencies who serve people facing homelessness or people at risk of homelessness report into HMIS, so we get the most accurate view of where agencies serve folks and programs,” DCHC member Dani Shaw said.

Shaw said DCHC has not published those results but is working to make that information available in the future. Data the coalition finds is reported to its committees and groups.

Ortega said it is important to have an accurate estimate of the number of people experiencing homelessness to understand the scope and nature of the problem and the policy responses and funds that are needed to address it. The PIT numbers are used to determine funding allocations, dividing up total funds among communities depending on population size.

“The PIT count represents only a portion of the homeless population, yet many interpret the count as a comprehensive depiction of the crisis and rely on it to inform policy design and decisions,” Ortega said. “I believe that this can lead to policies that fail to address the nature of homelessness and level of crisis on a state and local level.”
SHARE THIS STORY