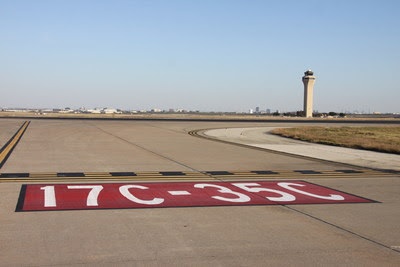 DFW Airport Runway 17-C/35-C will be rehabilitated next year thanks in part to an Federal Aviation Administration grant of $52 million.

Dallas-Fort Worth International Airport will rebuild and install new technology on one of its busiest runways after receiving several grants totaling more than $52 million.

The airport received two grants for airfield improvement from the Federal Aviation Administration totaling more than $52 million. The bulk of the Airport Improvement Program grants, about $49.5 million, will be used for the refurbishment of Runway 17-Center/35C-Center and associated taxiway improvements. Another $2.6 million will fund a lighting upgrade for the terminal ramp areas.

"Next year, we plan to rehabilitate the runway used for more arrivals than any other at DFW, and this grant from the FAA will go a long way toward funding that critical infrastructure need," DFW Airport CEO Sean Donohue said in a statement.

The rehabilitation project for the runway features the installation of an updated pavement sensor system for measuring weather impacts. The project is scheduled to take place in mid-2018. The runway will be closed for about four months, but DFW's six additional runways will allow a full schedule of flight operations, a news release said. Travelers should not see significant air traffic delays during the closure.
SHARE THIS STORY