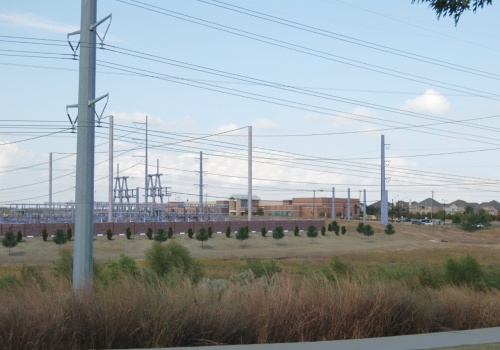 A rendering of the proposed substation on Legacy Drive in Frisco.

Frisco residents wearing buttons that read "Power is in unity, not substations," filled the cafeteria at Reedy High School in Frisco Thursday evening to attend an Oncor community meeting.

The utility company held an informational open meeting to help inform residents about its proposed substation on Legacy Drive across from Allen Elementary School and Legacy Christian Academy. Oncor representatives were on hand during the meeting to answer questions.

"This meeting is to continue the open dialogue with Frisco residents and city officials and other stakeholders," said Geoff Bailey, director of communications for Oncor. "Our goal is to answer any questions or concerns they may have about the substation and the location." An Oncor representative shows Frisco residents a map of the proposed substation on Legacy Drive in Frisco along with other possible locations.[/caption]

The Frisco Planning and Zoning Commission held a public hearing May 10 regarding the substation. The proposed substation would service new developments like the Dallas Cowboys' new headquarters, The Star in Frisco, Wade Park and Frisco Station. Because the land is zoned commercial, Oncor is seeking a special use permit to build the substation on the property. Many residents took to the podium to express their concerns over having the substation near the school and in their neighborhood.

Some expressed concerns about health risks that may come from the substation's electromagnetic fields. Others, like Jamie Heit, were more concerned about the zoning. Heit has been heading a group known as Frisco Families Against Oncor Substation.

"We know as residents that [the substation] needs to go somewhere but we all bought our homes knowing that area was zoned for commercial, not utility," Heit said. "If I had known it was going to be used for utility, I would have bought my home elsewhere."

City officials and P&Z commissioners were also present at the Oncor meeting. Many said there were better locations for the substation. Frisco City Council Member Will Sowell said when the request comes to City Council he will vote no.

"I don't buy into the health issues people keep talking about regarding the substations, we have substations all over Frisco in neighborhoods and near schools," Sowell said. "My main concern is zoning. When you bought a house in that area you believed that area was zoned for commercial use, not utility use. I don't think it's right to do that to the homeowners."

Oncor representatives told residents Thursday that the property on Legacy Drive is preferred because of the transmission lines already running through the area and there was a willing seller of the property. In other locations Oncor would have to build transmission lines, which would be more expensive. Another location being looked at by Oncor includes a piece of property next to Brazos Electric substation on 4th Army Drive. However, because the area has sewer and water lines underneath the ground it would require more work and added costs.

Oncor approached the city of Frisco about a year ago to talk about placing a substation at Legacy Drive, Frisco Director of Development Services John Lettelleir said. Because Oncor did not submit an application for the SUP until March 14, however, the city could not begin their investigative work until after an application was submitted, he said.

"We talk to so many people that want to develop within the city and we can't do anything until they submit the paperwork because of a lot of times it just falls through and they never submit an application," Lettelleir said.

Once the application was submitted Oncor was required by the city to hold community meetings to let residents know about the substation. This is a requirement for anybody who submits an application for an SUP.

Another P&Z public hearing is planned but has not been scheduled as of yet. If the commission turn down the SUP, Oncor could appeal to City Council, according to Oncor. If council turns down the SUP, Oncor would need to find another location or they could bring the case to the Public Utility Commission of Texas.
SHARE THIS STORY