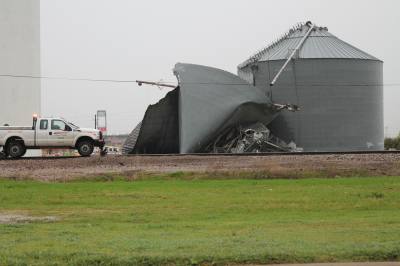 One of the metal silos near Frisco's downtown collapsed in a storm March 8.

City Director of Administrative Services Tom Johnston said the city is still determining the next steps for the metal silos damaged in the March 8 storm.

City officials are still evaluating the silos for possible reclamation/preservation and no decision has been made to tear them down.

A 6-foot temporary fence has been placed around the area.

Johnston said the city hopes to have more information available about the next steps in the process by the end of next week.

One of downtown Frisco’s metal grain silos collapsed because of high winds in the March 8 morning storms.

Assistant Fire Chief Paul Siebert said the silo, located on the corner of John Elliott Drive and Main Street, did not block the roadway when it collapsed and no people were injured. The city’s emergency response teams cordoned off the area and began a damage assessment with support from public works and environmental services crews.

Some debris from the silo fell across the adjacent utility rail line, and city crews as well as BNSF Railway crews were expected to address cleanup and any potential damage, Siebert said.

The historic white silos, thought to be constructed in the 1940s or 1950s, are believed to be undamaged, Siebert said.

Finding a new use for the historic silos has been discussed by the city in the past. In 2014 the historic silos were being considered as a possible dining/lounge space and a multipurpose facility, but the prospective tenant determined it was not an economically viable project with the cost of infrastructure improvement that would have been required, according to city officials.

In 2013 city officials said that while the white silos were thought to be structurally sound, the metal silos were not.

Siebert said the fire department received reports from some Frisco residents of damage to fences, roofs and a few older trees after the storm rolled through.

He said there were a few small pockets throughout the city without electricity, including an area of Rockhill Parkway.

No injuries were reported, which Siebert attributed to the advance weather warnings broadcast over the past few days. He said the storm is a good reminder for people to stay vigilant about potentially severe weather situations.
SHARE THIS STORY