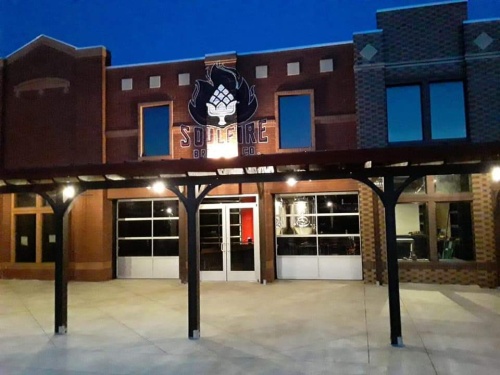 The building is owned by couple Irene and John Dancer, who began construction for the project in February, according to previous reporting by Community Impact Newspaper.

And in September, the first vendor made its debut at the food hall, and another opened this week. So far, a total of six eateries have opened or are planned. There is space allotted for potentially one more.

Irene Dancer said the goal is for three anticipated restaurants—Famous Fatsos Burgers, The Hot Potato and Churchill’s—to open before Oct. 12 or in the following week.

Soul Fire Brewing Co.
The brewery was the first to open at the food hall. It features craft beer, such as lagers, stouts and India pale ales, along with a selection from other breweries. The soft opening took place in late September, and a grand opening is scheduled for Oct. 19.

Famous Fatsos Burgers
This restaurant will offer burgers, chicken sandwiches, curly fries, onion rings and hot wings. An assortment of sauces will be available for dressing and dipping.

The Hot Potato
Customers will be able to order loaded baked potatoes with various toppings of their choosing. The Hot Potato will also offer specially made tater tots stuffed with cream cheese and dressed in jalapeno ranch dressing.

Churchill’s
This restaurant will serve popular British fare, including fish with chips and shrimp with chips. Side items will include servings of coleslaw and mushy peas. Its dessert menu features fried candy bars and apple pie with vanilla ice cream.

The Hot Taco
Operated by the same couple who owns The Hot Potato, The Hot Taco will offer tacos and burritos. An anticipated opening date for this business has not been determined. It is estimated to open around the same time as Smiley's Barbecue.

Oak St B&V
The Dancers also own the two-story building next door to Oak St Food & Brew. The couple plans to renovate the second floor to include a “bed and vouchers” business—something akin to a bed-and-breakfast. There will be three rooms for guests to rent, and guests will receive vouchers they can use to exchange for food or drinks at the food hall. The first floor will be used for retail space, including a spot for a florist. The goal is to have the Oak St B&V open by the end of November, Irene Dancer said.