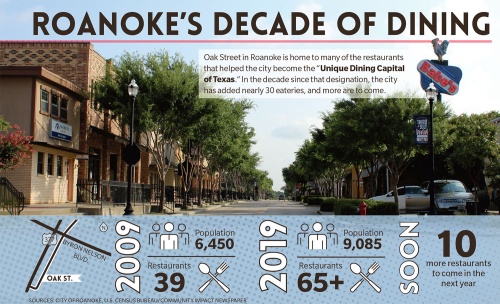 Oak Street in Roanoke is home to many of the restaurants that helped the city become the u201cUnique Dining Capital of Texas.u201d In the decade since that designation, the city has added nearly 30 eateries, and more are to come.

Roanoke’s title as the “Unique Dining Capital of Texas” is not just a marketing tool. The state House of Representatives officially bestowed the designation a decade ago.

At the time, the city had 39 restaurants across 6 square miles, according to Roanoke Assistant City Manager Cody Petree. Today, that number has grown to more than 65. But there is still room for more concepts, such as a new food hall.

Roanoke officials said the designation has lured more eateries to the city, particularly to its downtown area on Oak Street. Restaurant owners have also been attracted to Roanoke’s growing population and new developments. And they are hoping to capture diners from among the new residents and workers flocking to corporate campuses in Fort Worth and Westlake.

Whether those customers are seeking South African dishes or a sweet treat, Roanoke has them covered. Next up for the unique dining capital is a trendy food hall.

John and Irene Dancer are the owners behind one of Roanoke’s newest restaurant concepts.

The couple began construction in February on Oak St Food & Brew. The food hall is expected to open in August or September in the building that used to house The Plaid Peacock boutique.

Oak St Food & Brew will span 11,400 square feet and feature four restaurants, a brewery, and indoor and outdoor seating when it opens.

“We thought … [we could] bring different venues in and have a little bit more reasonably priced menus for lunches,” Irene Dancer said.

In addition to new concepts, Oak St Food & Brew has plans to add more outdoor seating, including a couch and a fire pit.

“We are the ‘Unique Dining Capital of Texas,’ and we want [the food hall] to be unique,” she added. “We want it to be where there’s a variety of items there. You can go to the brewery and get your cocktail and then be able to go and get whatever food you want.”

Roanoke’s reputation for its dining options has grown over the last few decades. Francis Silmon has spent more than two decades as general manager at The Classic at Roanoke, a fine dining eatery on Oak Street. He said when The Classic opened on Oak Street in 1993, the city had few other dining options, including Babe’s Chicken Dinner House, which opened just two weeks prior to The Classic.

The Classic’s co-owners, Chris and Curtis Wells, were attracted to the upcoming development in the area. And over the past several years, development has boomed, Silmon said.

“[Restaurants have] become the center of Roanoke’s entertainment and its primary draw,” Silmon said. “The focus of Roanoke is the diversity of the restaurants and them being non-chain-type restaurants.”

Jack Layman is part of the wave of restaurants that have opened in Roanoke over the past several years. Layman owns Cajun concept Bayou Jack’s Cajun Grill, which opened in 2011, and Jack and Grill, a sports bar that opened in 2013.

Both restaurants are located along Oak Street.

Layman said having unique menus has allowed his concepts to thrive in Roanoke.

“For us, [business has] been fantastic. We hit the ground running,” he said. “I think any concept coming in that’s unique and different would do well [in Roanoke].”

Improvements along Oak Street helped spur more development in the area in the late 2000s. Between 2007-08, the city invested $8 million to repave the roadway; add a roundabout; and install streetscapes, landscaping and street lighting.

With the road work done and a growing business community, Roanoke City Council and city officials began a push for a campaign that would encompass more of its unique offerings.

Mayor Scooter Gierisch said it made sense that Roanoke would be highlighted for its dining options.

“Probably what set us off the most was the attraction to Babe’s Chicken Dinner House. People sit outside of Babe’s for one to two hours in some cases trying to get into this very eclectic restaurant,” Gierisch said. “We looked at that and [thought] that if [customers] will travel to this restaurant, we could build off of that.”

In 2009, the city of Roanoke worked with state Rep. Tan Parker, R-Flower Mound, to push for the “Dining Capital of Texas” designation. The Texas House of Representatives added in “unique” after looking at the variety of Roanoke’s restaurant options.

A decade after receiving the designation, the city is still capitalizing on that branding. City Manager Scott Campbell said he expects the city to add 10 more eateries in the next year.

Development around Roanoke is also helping bring in more options. Roanoke boasts a daytime population of more than 50,000 people, Campbell said. That number is made up of people working in the city and at nearby AllianceTexas, a development that is home to more than 500 companies in northeast Fort Worth.

Nearby Westlake is also growing.

Still to come is The Peabody Roanoke, a luxury hotel set to open by April 1, 2022. It will have a formal restaurant, but details have not been announced.

Layman will also add to his portfolio with two new concepts opening next year. Family entertainment center LVLUP is expected to open in spring 2020. Layman will operate a sports bar and offer finger foods for customers playing games.

Coming even sooner is Los Compadres, a Mexican concept set to open in January across Oak Street from Wise Guys Pizzeria. It will feature Tex-Mex cuisine and margaritas.
SHARE THIS STORY