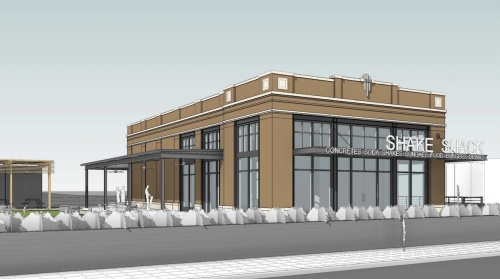 A rendering of the revised plan for Shake Shack.

Southlake City Council denied the proposed site plan for a Shake Shack at 115 and 125 Central Ave., Southlake, near Summit Park at its meeting Tuesday, March 20.

"If a developer submits a proposal that is compliant with the city’s existing plan and with its development regulations, the council is required by law to approve the development plan," Taylor said to the council. "You do not have the discretion to impose the broad range of items that you can consider in making a zoning decision."

What the council does have discretion over, the attorney said, is a regulation from the previously approved site plan calling for dual entry or exit accessways to support the activity on that site.

"This proposal is regulatory compliant, except for the decision to reduce the number of accessways from two to one," Taylor said.

While the council agreed the building as presented looked beautiful, members did take issue with the number of accessways.

"We did reach out to our traffic engineer to have them look at this, and we have concluded that the elimination of that drive aisle is a positive," Bliss said. "It reduces conflicts at the left turns coming out of Trader Joe's at this site, so I hear what you’re saying. On the other hand, having studied it and having our traffic engineer study it, they concluded from a traffic standpoint that this is a better result."

Many of the council members agreed with the mayor, with Council Member Randy Williamson calling it "addition by subtraction."

Bliss said that based on council feedback from the Feb. 6 meeting, he took the time and expense to change the look of the restaurant. He added had the council given him a clearer set of instructions about the drive aisle, that would have been his focus for the last six weeks.

Hill responded by saying the issue of mobility was brought up to him but was probably overshadowed due to the fact the previous site plan had the restaurant designed like a barn, as she described it.

The mayor stressed several times to those gathered in attendance that the council could not do anything about which restaurant goes in at the site. Hill then read through numerous cards of residents voicing their opposition. A few residents came forward to speak, including Matt Shirley and Jim Posey, adding the noise level of the restaurant would disrupt those living in the Brownstones downtown residential community.

Two residents came forward to speak in favor of the project. Jason Cassell said if the council did not close the road, he would look into closing the road himself. Chris Wallace said with many stores and restaurants facing challenges, they look to atmospheres and environments where they can succeed. Closing the drive aisle would help these businesses succeed, which is something he said would benefit all parties.

"At the end of the day, what you have is the ability to develop a restaurant ... administratively, through staff either with the north drive or without it, but right now you can only do it with the north drive there, that’s just what it comes down to," Williamson said. "You can build a building, you can have a restaurant sitting right there regardless of what we do here tonight, it's whether or not you can have that road going by … but today that’s all we’re considering at this point. That’s all we can do."

Council Member Shawn McCaskill made a motion to deny the site plan, which was approved 6-1, with Chad Patton voting against.

Senior Director of Planning and Development Services Ken Baker said the option remains to continue the site plan administratively, which would mean city staff will handle the request without the item going before the council again.