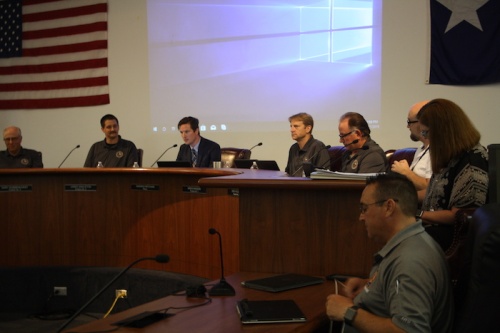 Jersey Village City Council voted to raise homestead exemptions from 8% to 14% at a June 17 meeting.

Homeowners in Jersey Village will be able to cut more value from their homes when calculating property taxes, potentially saving them hundreds of dollars on their 2020 tax bills.

“We’ve had a lot of discussions and have looked at a lot of numbers … to ensure we are only asking taxpayers to contribute what is necessary to complete the projects the electorate ha[s] sent us here to do,” said Council Member Bobby Warren, who has called for raising the exemptions since running for his seat on council in 2017 and proposed raising it to 20% last fall.

The decision was made following a series of workshop sessions during which Council members and city staff analyzed how raising the exemption could affect city revenue, reserves and future capital improvement plans. The move will cost the city roughly $387,000 per year in property tax revenue, City Manager Austin Bleess said.

“It does not jeopardize any projects we currently have in Capital Improvement Plan,” Warren said. “It does not in any way jeopardize our reserves, and this is all taking into account a very conservative approach.”

As of May, the city had $16.5 million in reserves in its general fund, some of which is slated to be spent on capital projects over the next several years. In its fiscal year 2018-19 budget, which was adopted last September, the city projected to raise about $6.65 million in property taxes, which make up about 42% of overall revenue.

Based on the city's property tax rate of $0.7425 per $100 valuation, the measure is expected to save the owner of a home valued at $246,700—the median value in Jersey Village in 2017, according to the U.S. Census—an average of $110 per year. It would save residents over age 65 an average of $296 per year when also factoring in the increased homestead exemption. Roughly 20.7% of Jersey Village residents are 65 or older, according to census data from 2017.

Texas law set a maximum homestead exemption of 20%. There are no limits on how much of an exemption can be offered to disabled residents and residents over age 65.

Warren said he would have liked to have raised the exemptions higher but said the city’s reliance on tax revenue from single-family property places it in a different situation than other entities such as the city of Houston and Harris County, which rely less on single-family homes for revenue. Warren said he would like to see the city find ways to bring in more sales tax revenue to lower the burden on property taxes.

The city last increased its homestead exemption in 2003. The $50,000 exemption for residents over 65 was implemented in 2009, and the city did not offer any such exemption before then.

Both Warren and Jersey Village Mayor Andrew Mitcham said additional increases in exemptions will be considered in the future.

“This is likely not the stopping point, in my opinion,” Mitcham said.