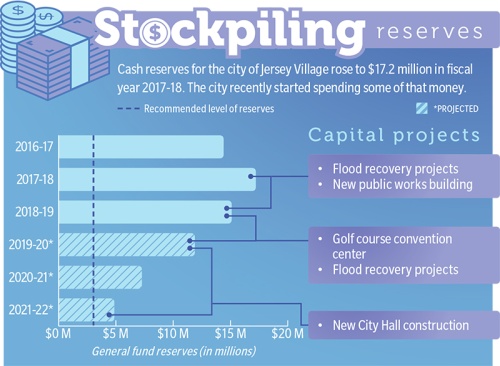 The city of Jersey Village is at a pivotal point in its history, according to Mayor Justin Ray.

Ray has spent the last several months working with city staff and the Jersey Village City Council on a budget for the upcoming fiscal year, which begins Oct. 1. It is a task he has taken on each year since he was elected mayor in 2015 and for the three years prior to that when he served on the council.

However, the atmosphere in Jersey Village is different this time around. A six-year project to widen Hwy. 290 from Loop 610 to the Waller County line—a project that cuts through Jersey Village and Ray said has created headaches for residents and nearby business owners for years—is nearing completion, with all main lanes set to open by the end of 2018.

“The expansion of [Hwy.] 290 has been the 800-pound gorilla in the room on many city issues,” Ray said. “A lot of businesses have moved or are just holding the line. The commercial and transit atmosphere and the overall image of Jersey Village will all improve as a result of the [Hwy.] 290 completion.”

With the light at the end of the tunnel in sight, Ray said city officials are prioritizing several development and renovation projects in the upcoming budget, including the construction of a 10,000-square-foot convention center at the Jersey Meadow Golf Course and the implementation of new entrance signs throughout the city. The city also purchased 23 acres in August at a site south of Hwy. 290 where officials want to spur a high-density gathering space, a move some Jersey Village residents said was carried out too quickly and without enough resident input.

City Manager Austin Bleess said reserves could be in play to help fund projects in future budgets as well, including when construction begins on a new City Hall, potentially in 2020. He said the city will always maintain about a 120-day operating reserve for emergency situations, above the recommended 90 days.

A common theme in the planned improvements is making the city more competitive with other, newer communities in the Cy-Fair area. Several initiatives are underway or have been recently completed to this end, including a $250,000 splash pad that opened in July as well as plans to build a convention center at the Jersey Meadow Golf Course that could cost $2.4 million.

Ray said he wants to attract more exciting retail and entertainment options to the city.

“Jersey Village is about 92 percent built-out, and we are inundated with car lots, warehouses and industrial complexes,” he said. “One of the things we struggle with here is a lack of entertainment, retail, restaurants, gathering places ...  things like that.”

The focal point of these efforts has been a 274-acre tract known as Jersey Crossing, which the city is aiming to turn into a mixed-use gathering place with retail, entertainment, office and residential units.

The city adopted a master plan for Jersey Crossing in 2010 and set new zoning ordinances. A former landowner in the area, Jones Road Holding Ltd.—which bought 23 acres of the property before 2010 with plans to use it for industrial space—filed a lawsuit against the city in 2015 claiming the change in zoning ordinances reduced the land’s value and development potential.

The lawsuit was settled in 2017 when the council entered an option period to purchase the 23 acres for $5.25 million. Officials also created a tax increment reinvestment zone, or TIRZ, for the area in November with hopes of incentivizing development. The purchase itself was approved by council at an Aug. 6 meeting.

Since purchasing the land, Ray said developer interest has gained momentum, and he expects to announce a developer partnership within the next several months. He said he could not confirm any details about conversations with developers.

The city does not own any additional land in the Jersey Crossing area, and Ray said he does not anticipate keeping ownership of the 23 acres for long. Once a partnership is struck, Ray said the city intends to sell the land to a developer and recoup its $5.25 million investment.

On top of the Jersey Crossing expense, the budget adopted Sept. 17 earmarked more than $8.8 million for capital projects. Roughly $3 million of that total will come from general fund reserves, which sat at
$17.2 million at the start of the fiscal year 2017-18.

Bleess said the common practice is for cities to have 90 days of operating expenses on hand at all times in case of emergency. Even with all the projected spending, the city will always be above that target, he said.

City projections indicate general fund reserves could be depleted to $4.8 million at the lowest by FY 2020-21, at which point the 90-day operating reserve would be about $3.2 million.

However, Bleess said the city’s projections assume it will pay for everything out of pocket, which might not be the case. The city received news Sept. 14 the it will receive $520,000 in grant funding from the Federal Emergency Management Agency for design work on several city flood prevention projects. The awarding of the design grant bodes well for the city to receive additional grants—possibly more than $4 million—for construction on the projects.

The potential grant funding, as well as ongoing efforts to flip the Jersey Crossing acreage to a developer, make it difficult to estimate how much the city will have in reserves at the end of FY 2018-19, Bleess said. As of press time, the city was poised to earmark $3.9 million for flood projects in its FY 2018-19 budget, money it will not need to spend if it gets the grant.

“I err on the conservative side of things,” Bleess said.

City Council Member Bobby Warren said reserves were built up over several years of multimillion-dollar budget surpluses. Even with the capital investments, he said he believes the city is in a position to increase its homestead exemption—an amount homeowners are allowed to deduct from their home value when paying property taxes—from 7 percent to the maximum of 20 percent. Meanwhile, the property tax rate, which will be adopted in October, is expected to stay the same this year at 74.25 cents per $100 of valuation.

Assuming the city able to sell the 23 acres in Jersey Crossing, Warren said he plans to push for increasing the homestead exemption next year.

“Capital projects are, by their nature, a one-time investment,” he said. “Assuming all investments are made in a timely manner, there’s no reason we could not implement a max standard homestead exemption and maintain a very healthy fund balance.”

Many of the projects in the budget come directly from a comprehensive plan the city updated in 2016, a process that involved gathering public input, Ray said.

However, some citizens have expressed concern over how fast the city is moving forward with certain elements of the plan, particularly Jersey Crossing.

Simon Hughes, a Jersey Village resident and former City Council candidate, said he supports efforts to bring in businesses but said he feels the city should have given residents a chance to provide feedback before approving the $5.25 million land purchase.

“I think it’s clear that a majority of residents want more retail and more restaurants in the area, but it’s certainly not a given that residents want to risk the city’s taxpayer funds on a project for which no developer has made a commitment,” Hughes said.

Hughes was among a handful of residents who attended the Aug. 6 meeting where council members approved the purchase. The council did not take any public comments at the meeting. Unlike the adoption of a tax rate or the annexation of land, the purchase of land does not require a city to hold a public hearing or take public comments under Texas law.

Ray said he believes purchasing the land was critical to keeping momentum going with developers. He said the city’s other options—re-entering litigation with the landowner in late August or rezoning the property—would have killed all development momentum.

Ray said the feedback he has gotten from residents has been broadly positive, and he believes the budget reflects the community’s vision for the future.

“It’s reflective of what community wants to do,” he said. “They expect us to take advantage of the upward trajectory, grow the community, attract businesses. We’re doing everything we can within our budget to tackle those items.”