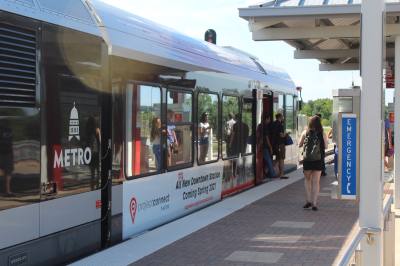 People exit the MetroRail at Leander Station on July 17.

MetroRail service in and out of downtown Austin resumes Nov. 4, and Capital Metro is also expanding rail service to Leander.

In June, Capital Metro closed its downtown rail station adjacent to the Austin Convention Center to allow for the start of construction on a new station. Crews have been building a temporary station east of the downtown station.

Opening the temporary downtown station will allow Capital Metro to resume service beyond the Plaza Saltillo station. The agency has been using shuttle buses to transport riders between Plaza Saltillo and downtown and also added MetroExpress commuter bus routes. In January, the added Express service on Saturdays will end with the return of MetroRail service.

The transit agency began construction on the new $38.86 million station in April, and it is slated to open in spring 2021. Features of the new station include three train platforms, a public plaza and canopies over the platforms.

Additionally, opening the new station will allow Capital Metro to increase the frequency of MetroRail to every 15 minutes.
SHARE THIS STORY

Hospitals have struggled to staff beds during the delta variant surge.

The Williamson County Precinct 4 Constable's Office is one of five statewide to receive the FBI-LEEDA Trilogy Award.