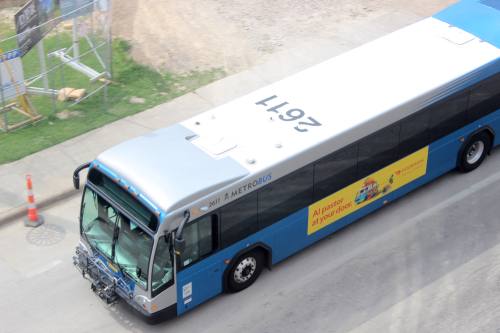 Over the course of the next year, Capital Metro is preparing to spend millions of dollars to improve its transit experience for riders.

This includes spending $2.9 million on bus stop enhancements, such as shading, cameras and lighting, as well as upgrading the Norwood transit center at Walmart for $570,000. Other upgrades planned over the next year include continuing construction of the new downtown MetroRail station, implementing Positive Train Control system safety upgrades and rolling out a new fare collection system at a cost $3.4 million.

These items were included in the fiscal year 2019-20 budget, which the agency’s board approved Sept. 23. The $403.69 million budget includes operating expenses of $287.1 million and allocations of $109.7 million for capital projects, such as the new downtown rail station.

Capital Metro is anticipating it will bring in about $333.6 million in revenue. This number assumes a 3% increase in sales tax revenue, up to $265.7 million, according to Capital Metro. The anticipated percent increase is slightly lower than was assumed by Austin City Council, which approved the city's $4.2 billion budget with a 3.5% sales tax revenue increase.

“Sales tax makes up 80% of our revenue and is such a big part of our budget, and we need to be conservative,” said Reinet Marneweck, the agency’s chief financial officer.

One of the biggest capital expenses Capital Metro is investing in over the next five years includes the purchase of 80 electric buses. For FY 2019-20, the agency will purchase the first of those 10 buses for $11.7 million, $4.9 million of which is being covered by state and federal grants.

Marnetweck said spending nearly $110 million on capital projects is in line with the agency’s expenses in the previous fiscal year. However, over the next few years, that amount will trend downward as Capital Metro ticks off its major planned projects.

“We had this built up list of projects to complete and built up a slate of good repair [projects] over the years, and we’ve been gradually working away at that,” Marneweck said.

Typically, the transit agency spends about $30 million-$50 million on capital projects each year, she said.

“The reason why we spent so much in recent years is we had accumulated reserves to get things done, like the downtown station and Positive Train Control,” she said.