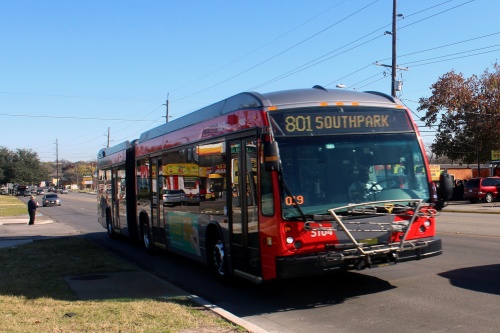 Capital Metro will study different modes of transit such as bus-rapid transit on corridors throughout the region, including on North Lamar Boulevard.

The Capital Metro board gave its stamp of approval on a regional transit map that outlines the future of bus and rail services in Central Texas and is likely to lead to a November 2020 bond.

Project Connect is a regional high-capacity transit vision that aims to move the greatest number of people without disrupting traffic. The vision map highlights key corridors that Capital Metro will study over the next two years and identify the best transit mode, such as bus-rapid transit, light rail and even autonomous vehicles. The vision map also includes a regional perspective showing services connecting to Georgetown, Hutto, Round Rock, Leander, Cedar Park and Buda.

“This is really the only regional vision plan that we’ve had that has had any sustained public involvement and commentary in the 15 years that I’ve been involved in transportation,” Capital Metro board Chairman Wade Cooper said Dec. 17 before the board’s vote. “I think the message that we’re sending today to our colleagues at the city, the county, [the Texas Department of Transportation], the [Central Texas Regional Mobility Authority] and surrounding counties is let’s work together.”

Project Connect initially began in 2013 and resulted in a North Corridor plan identifying transit options between downtown Austin and cities including Pflugerville, Round Rock and Georgetown. A separate transit corridor plan, the Central Corridor, resulted in a failed 2014 rail bond, and Capital Metro pressed pause on planning.

Efforts on Project Connect resumed in early 2016, and staffers began looking at which corridors would be best suited for transit. Capital Metro unveiled a draft map in October and hosted meetings with the public to gather input.

“I’m encouraged by the vision plan because it reaches all parts of the community,” Mayor Steve Adler said. “We have a high-capacity mass transit that has the most important corridors where most of the people are traveling and then underneath that we have our bus network so people can get from their homes to the high-capacity transit. It’s a system that builds on itself.”

Feedback from the public meetings, which included over 400 comments, resulted in changes to the vision map, such as adding Parmer Lane as a corridor and looking into ways to extend the MetroRail Red Line and future Green Line farther west from the downtown station to Republic Square Park.

Project Connect Program Officer Dave Couch said the next steps are to move forward in April with the preliminary engineering and the environmental study of the Orange Line, referred to as the spine of the vision map and running from Tech Ridge down North Lamar Boulevard and South Congress Avenue to Slaughter Lane.

Three months after that, Capital Metro will start the preliminary engineering on the Blue Line that runs on Riverside Drive up to Austin Community College’s Highland campus. Preliminary engineering would commence on the remainder of the corridors after that. This work is estimated to cost about $12 million and is being funded through the agency and the city, Couch said.

Couch said this is not an indication of priorities.

“We know that because of the complexity of the [Orange Line], that it is going to take longer; that’s why we’re starting that one ahead of the Blue Line,” he said.

Because Project Connect is a regional plan, local elected officials say the entire region needs to buy into the plan.

“There’s no denying that we can’t address our congestion problems in this community with a roads-only approach,” state Sen. Kirk Watson, D-Austin, said. “Transit is going to have to play a significant role. What I hope is that this is the beginning of a process with good community input where we come to some form of consensus as a community about how we’re going to do transit in Central Texas.”

State Rep. Celia Israel, D-Austin, represents parts of North Austin as well as Pflugerville. In the past few years she said the city of Pflugerville has changed positions on transit from not being interested to wanting to work together.

“The conversation has changed, not just within the urban core of Austin but also Hays, Williamson and Bastrop counties," she said. "That’s a good thing. Maybe that will mean an even better approach and a truly regional system that’s going to connect more people.”

Exactly how much Project Connect will cost remains to be seen, but voters will get a say.

“I’m optimistic that this community will come together and build a consensus necessary for us to have a bond and move forward with it in November 2020 because this a community that is ready for us to actually solve this [transportation] problem,” Adler said. “People are tired of us talking about it. People are tired of not having mobility choices in the city.”
SHARE THIS STORY