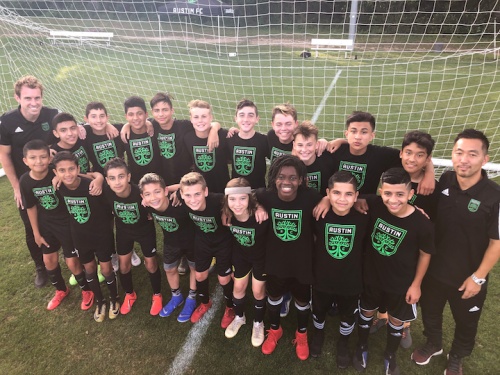 Austin FC on May 29 announced the roster of its first-ever youth academy team.

Local soccer fans will be able to watch players donning an Austin FC jersey as soon as fall 2019 after the Major League Soccer club announced its first-ever roster of youth academy players.

The Under 14 team, composed exclusively of Austin-area boys born in or after 2006, is the first academy team announced by Austin FC. According to a May 29 press release, the U14 team will begin playing in fall 2019 against other MLS academies and other youth soccer clubs in the U.S. Soccer Development Academy system.

“Austin is very rich in talented youth soccer players,” Junro Narita, head coach of the U14 team, said in a press release. “This group represents a genuine integration of players with diverse backgrounds, skill sets and personalities that reflect this vibrant community.”

The team’s roster is composed of 19 individuals, all hailing from the Austin area. Fourteen of those players came from the Lonestar Soccer Club, headquartered in Northwest Austin, while the rest of the team previously trained with Barca Academy Austin and Liverpool Barnes.

Austin FC Academy recruited the U14 team over the course of six tryout sessions spread out over several months, according to the press release.

Austin FC’s newest youth academy team is currently set to train and play its matches at St. Stephen’s Episcopal School located off Loop 360. Eventually, the team will permanently relocate to the recently announced St. David’s Performance Center when it is constructed.