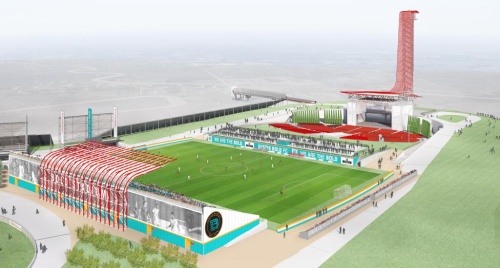 Austin Bold FC will play its inaugural season in 2019 at the Circuit of The Americas at a new 5,000-seat stadium.

The city last had a professional soccer team in 2015 with the Austin Aztex, which played from 2011 until its 2015 season when the Memorial Day floods forced games to move from House Park to a Round Rock ISD facility.

“The best part about this franchise is it is the first time professional soccer in Austin really has a fair chance at succeeding,” Austin Bold FC General Manager Roberto Silva said.

Austin Bold FC, named after the city’s boldness for creativity and innovation, has also confirmed the signing of three players: Edson Braafheid, from the Netherlands and who has played in the 2008 Olympic games and in the 2010 World Cup final; Marcelo Saragosa, who has played nine years for Major League Soccer, including for the Los Angeles Galaxy and for FC Dallas; and Kléber Freitas, a Brazilian striker known as "Gladiator.”

“The kids are going to be happy to see [Freitas] on the field,” Silva said.

“He hasn’t announced,” Silva said. “Even if we don’t get him now we’re going to try to get him soon. We’re excited to have that opportunity to get him to Austin.”

With the fate of having an MLS team in Austin still up in the air, Silva said it is too early to tell if Austin Bold FC will have local competition.

“If it does happen I think we’ll have a great Austin rivalry,” he said. “In many places in the world it’s very common to have local rivalry.”

Silva said the team will also be involved with the community and the numerous youth and adult soccer leagues.

“It’s about having the entertainment option and allowing the kids to see professional soccer and development [of their skills] and an opportunity for our homegrown talent to stay in Austin,” he said.