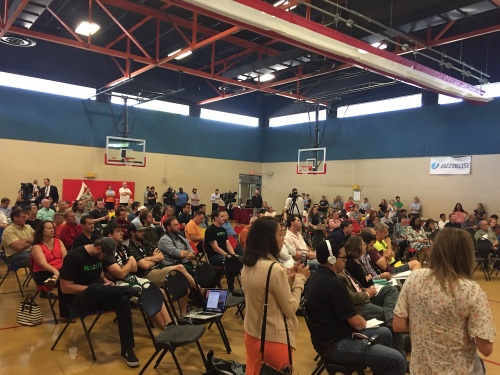 A crowd of more than 100 attended an information session on Tuesday, May 8 at the Northwest Recreation Center to learn more about a potential Major League Soccer stadium at McKalla Place.

The questions from the crowd of about 100 at Tuesday night's public information session regarding Major League Soccer in Austin ranged from the hyperlocal ("How will traffic be affected?") to the broad ("Why does an MLS team want to leave Columbus?").

The residents gathered at the Northwest Recreation Center in Austin wanted to learn about how a 20,000-seat soccer stadium at McKalla Place would affect their neighborhood, what it would cost the city and when all these plans might be put into place.

Columbus Crew Chairman Anthony Precourt announced his intentions to move the team to Austin in October, and since then he has been searching for a viable stadium site on city land. In December city staff recommended eight potential stadium sites, and in March Precourt Sports Ventures narrowed its focus to McKalla Place.

Community Impact Newspaper will have more information from the city by June 1, when staff return to City Council with an analysis of the site. Here's what we know from the perspective of the Crew's operating group.

1. There have been no negotiations between PSV and the city

On March 22 Austin City Council gave staff a directive to gather information about the fit between McKalla Place and the MLS---that process involves analyzing the site's history, considering how a stadium would fit into the existing neighborhood plan and gathering community feedback. Meanwhile PSV is preparing to make a proposal to the city for an agreement to build the stadium on the land.

However, the city and PSV have not had any direct negotiations. Richard Suttle, an attorney with Austin firm Armburst and Brown who represents PSV, said he hopes council will give the go-ahead before its July break for the two sides to sit down at the table together.

While negotiations with the city have yet to begin, PSV has indicated it will privately finance the construction of the stadium.

"The city will retain ownership of the land and the stadium. That will be the proposal," Suttle said. "We're not asking for public funds to build the stadium."

2. PSV wants to move the Crew to Austin by next season

"The plan right now if we are privileged enough to speak with the city about this, is we'll have an MLS team in Austin playing in March 2019 at a temporary stadium," Suttle said. "If we come to an agreement on McKalla Place, we should be able to play there hopefully in 2021."

The MLS season runs from March through October. PSV has not indicated where its temporary home would be for two years should the team move before next season.

On March 5, the city of Columbus and the state of Ohio filed a lawsuit against Precourt, alleging the Crew cannot relocate to Austin now because the team accepted taxpayer funds.

Under Ohio's "Art Modell Law," named for the National Football League owner who moved the Browns from Cleveland to Baltimore, the plaintiffs argue PSV must give a six-month notice of its intentions to move the team, during which local individuals must have an opportunity to purchase the club.

PSV filed a motion to dismiss the lawsuit on April 20.

"I can't comment on litigation, but I can tell you it hasn't hit the pause button on bringing MLS to Austin," Suttle said Tuesday night.
SHARE THIS STORY