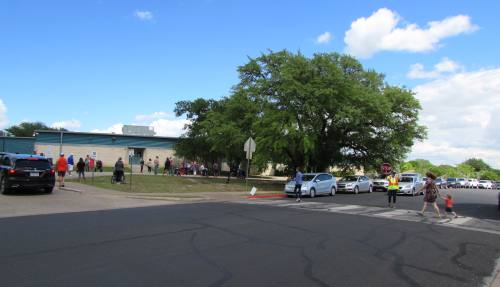 According to AISD Director of Planning Melissa Laursen, the committee recommended Plan K for both schools. The plan would rezone current Baranoff students in the Greyrock neighborhood and current Kiker students south of SH 45 to the new Southwest Elementary School.

Laursen said the primary goal of the committee was to get the Southwest Austin schools to between 75% and 115% of each campus’s enrollment utilization. Secondary criteria considered by the committee included transportation, keeping neighborhoods together and using natural boundaries as zoning borders, she said.

The boundary changes for Baranoff, Kiker and the new elementary school—as well as Cowan Elementary and Boone Elementary school recommendations made this summer—will likely be included within a vote for the district’s ongoing School Changes plan, which aims to consolidate campuses, realign feeder patterns and change boundaries to save operations and maintenance costs to add new programs for the district.

Unlike previously discussed plans for Baranoff, Plan K does not rezone current students at the northern part of the school’s boundaries. Previously, plans could have moved students from neighborhoods including Brodie Springs, Oak Creek Parke, Palomino Park and sections of Shady Hollow to Kocurek Elementary School to provide additional Baranoff relief.

Christy Reddish, a Shady Hollow resident who created the Keep Our Kids at Baranoff Facebook page, told Community Impact Newspaper that she and members of the group support the decision that will allow neighborhoods along the South Brodie Lane corridor to stay together at Baranoff.

“Contrary to some information, Baranoff does not feel like an overcrowded school to most families,” she said. “Students have space to learn and grow at the current population.”

However, Baranoff parent Jennifer Kratky, who lives in the Village of Shady Hollow neighborhood where the school is located, said other families are disappointed the relief provided through Plan K does not reduce the need for portable classrooms at the school.

Other plans that had been considered by the committee included one that could have brought Baranoff’s enrollment utilization to 101%, but its vote failed in an 8-8 tie.

“I am disappointed that Baranoff may not get the overcrowding relief that it was promised years ago,” Kratky said in an email to Community Impact Newspaper. “As taxpayers, we should all want to see the district’s dollars going to higher teacher pay or enriching programming, instead of maintenance costs for aging portable buildings when there are empty classrooms at another nearby school. This decision doesn’t seem to jive with the overall School Changes intention of placing all students in modernized buildings.”

According to the recommendations, rising fifth-graders at the three schools that are currently overcrowded—Baranoff, Kiker and Cowan—and their siblings would be allowed to stay at their current schools until the fifth-grader advances to middle school. Laursen said the decision was made so families with multiple elementary-age children would only need to attend one school for the 2020-21 school year.

For Bailey Middle School and Gorzycki Middle School, in which boundary change recommendations were made earlier this summer, rising seventh- and eighth-graders would be allowed to finish their middle school years at their current schools.

Recommendations from the committee would also freeze Baranoff, Kiker and Cowan to accepting transfer students for five years. Laursen said the decision was made because the committee did not want the relief created from the new boundaries to disappear due to new students transferring into the schools.