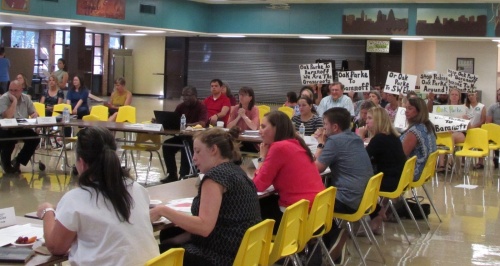 According to the Boundary Advisory Committee's website, the group will not meet to discuss additional boundary selections until mid-August. Meeting information will be posted to the website "as soon as the date, time and location are verified." The group had previously discussed meeting sometime during the week of July 29.

BAC selected a final boundary play for Boone and Cowan elementary schools and a final boundary plan for Gorzycki Middle School. Both plans will head to the superintendent's office for official review before being sent to the district's board of trustees for approval this fall.

Plans for Baranoff and Kiker elementary schools are still being evaluated, with decisions likely to come at a meeting still to be scheduled for next week.

BAC members requested district staff draw up additional data and plans related to the schools based on recent public feedback and a new plan presented by residents of the Oak Parke community. Boone and Cowan plan selected
In a reversal of a preliminary decision made May 29, BAC members voted to select Plan 13 for Cowan and Boone rezoning.

To reduce overcrowding at Cowan and add students to under-enrolled Boone, Plan 13 sends students at the Bella Vista Apartments to Boone, with all of the Sendera community staying at Cowan. Students currently zoned to Cowan in the neighborhoods of Ridgeview, Brodie Springs, Maple Run and Deer Park will also be moved to Boone, according to AISD documents.

Plan 13 was selected over the previously supported Plan 9, which would have split the Sendera neighborhood in half at Davis Lane, sending the north half to Boone and keeping Bella Vista Apartments at Cowan.

According to AISD Director of Planning Melissa Laursen, public feedback gathered at two open houses held July 18 and 20 indicated community support for Plan 13. Community members wanted BAC to avoid splitting Sendera into two sections, and also noted that the Bella Vista Apartments are closer and more walkable than the Sendera neighborhood is to Boone, she said.

“If Austin ISD is a neighborhood school district we should try to honor that as best as possible,” BAC member Erica Boyd said prior to the groups 14-1-1 vote in support of the plan Kiker and Baranoff decisions delayed
After a lengthy discussion about boundaries for Kiker Elementary School and the future Southwest Elementary School, BAC members requested additional data and plans be drawn up related to the schools.

An option currently on the table is a modified version of Plan B. The original Plan B, which was recommended by the BAC June 13, would send students in Circle C Ranch south of South Bay Lane to the new elementary school instead of Kiker.

Laursen said that based on public feedback, residents were concerned the original plan being considered would reduce walkability in Circle C Ranch and divide the community. Residents were also concerned about sending students south across SH 45 to the new school, she said. Others reiterated that Kiker indeed needs enrollment relief.

The modified proposal would draw a boundary line at SH 45, keeping all of Circle C currently zoned for Kiker at Kiker and reserving the new school for only the Greyrock and Avania communities. The proposal would supply some relief at Kiker—currently overcrowded at 150% its enrollment capacity—however, the school would still be enrolled above the district’s target of 115%.

Concerns about the modified plan also include opening Southwest Elementary School under enrolled at about 70% of its enrollment capacity, while the district hopes to open new schools at above 75%. However, enrollment projections at the new school do not include pre-k students, a program that could be added to the campus.

Additionally, Oak Parke residents—who face being rezoned from Baranoff to Kocurek —presented a community-created plan that would bus Oak Parke students to the new elementary school instead of Kocurek. Called “Plan J”, the new plan would also keep current Kiker students north of SH 45 at Kiker instead of moving them to the new elementary school. According to the plan, Southwest Elementary would open above 75%.

During public comment, Oak Parke parent Rachael Torres said that a petition to support the new Plan J gathered over 200 signatures from the Oak Parke community. While the majority of the community’s parents would still like to stay at Baranoff, where students are currently zoned, she said the community prefers Plan J over the previously selected recommendation.

BAC asked the district to develop an official presentation for Plan J and will consider it as well as other options at the next meeting. BAC members discussed holding the meeting July 29, but the exact date, time and location for the meeting has not yet been posted on the district’s website.