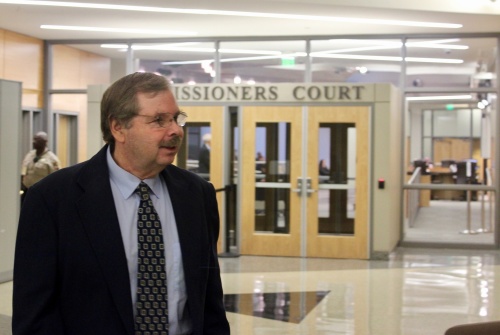 Travis County Tax Assessor Collector Bruce Elfant presented an update to county commissioners on the state of the tax office, more than three months after arrests were made in conjunction with motor vehicle fraud.

Leaders in the Travis County Tax Office appeared before county commissioners today, in response to an Aug. 23 grand jury report on fraudulent transactions in the tax office. The grand jury stated in the report that it found evidence of “inadequate supervision, poor accountability, bad management and outright negligence” that enabled the loss of likely millions of tax dollars.

The grand jury reported that Elfant—alongside supervisors and managers—failed to report suspicious documents and encouraged other employees to process the paperwork anyway.

“There appears to be a pervasive culture, within the supervisory ranks of the [Travis County] Tax Office, of willfully looking the other way when presented with questionable practices or behaviors,” the grand jury wrote in its report. “This lack of supervisory presence is a clear contributor to employees feeling emboldened to apparently steal from the county.”

“We know that fraud [was] committed,” Commissioner Gerald Daugherty said. “This really affects [the] Travis County taxpayers. Let’s face it. We have a problem on our hands.”

“We’re a fast-growing county,” Elfant said today. “We don’t have enough resources. It is a huge burden.”

Here is a map of the tax office locations that are open as of Aug. 28--the main office on Airport Blvd. and the Pflugerville branch.