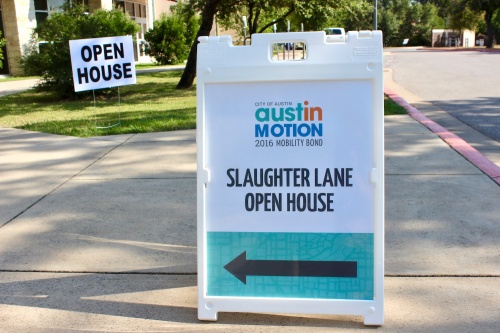 Austin’s Corridor Program Office provided an update on forthcoming safety and mobility improvements for the Slaughter Lane corridor at an Aug. 22 public meeting.

The Slaughter Lane corridor project will be funded by a projected $48.5 million from the city’s 2016 Mobility Bond and a $12.58 million grant from the Capital Area Metropolitan Planning Organization, spokesperson for the city of Austin Mandy McClendon said.

Voters approved a $720 million transportation bond in November 2016. Since, city staff has been working with a consultant to assign $482 million of the bond funds earmarked for projects on nine key corridors throughout Austin. The Slaughter Lane project is part of the area’s $1.4 billion Corridor Construction Program, approved by City Council April 26.

"I'm glad they're looking into [improvements for Slaughter Lane]," said Jeanne Devine, a South Austin resident who lives near Akins High School. "This is the third or fourth public meeting I've been too. The city is listening to us. That's good."

Preliminary engineering and design work—surveying the land, mapping the right of way, testing soil and holding public meetings—will continue through the end of the year, McClendon said. Final design is projected to last an additional 12-36 months, with the bulk of construction slated for 2021-24. The Slaughter Lane corridor project is in the preliminary engineering phase. Construction is not expected to begin until 2021.[/caption]