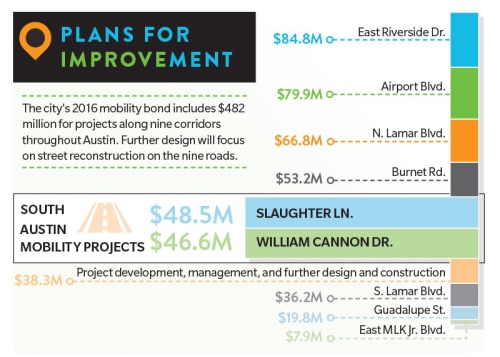 The city's 2016 mobility bond includes $482 million for projects along nine corridors throughout Austin. Further design will focus on street reconstruction on the nine roads.

About $95.1 million from the city’s 2016 Mobility Bond will be funneled toward improving safety and mobility along Slaughter Lane and William Cannon Drive in South Austin.

Voters approved the $720 million transportation bond in November 2016, and city staffers have been working with a consultant since then to craft a plan on how  to divvy up $482 million of those bond funds earmarked for projects on nine key corridors throughout Austin and chip away at the full $1.4 billion Corridor Construction Program that Austin City Council approved April 26.

“We will be seeking additional funding and leveraging opportunities for all the projects in the program—the full $1.4 billion program—regardless of whether they are getting 2016 bond funding or not,” said Mike Trimble, director of the Corridor Program Office at the April 10 council work session.

Approval of the program is a key step that gives staff the green light to move forward on preliminary engineering on the nine corridors. This process differs from work the city completed as part of the corridor studies in years prior.

“[The corridor study process] really was like a visioning process and really set the foundation for the overall vision for the next 20 years of what the corridor should become,” said Sara Behunek, communications manager for the city’s Corridor Program Office. “Preliminary engineering is more of a technical analysis.”

Preliminary engineering work is already underway and will continue through the end of 2018. This work will include surveying the land, mapping the right of way, testing soil and holding public meetings, Behunek said.

The corridor plan outlines 34 packages of projects on the nine corridors. The bond will be able to fund design and construction of what the city is calling corridorwide mobility improvements that include rehabbing pavement, improving intersections, replacing traffic signals and adding bike lanes, sidewalks or pedestrian crossing signals.

“A lot of the things a bicyclist wants is the same thing that a driver wants in many cases,” she said. “A lot of them want improved intersections and that’s where a lot of the delay is happening.”

Full design could take 12-36 months depending on the complexity of projects on each corridor, Behunek said, but the city anticipates doing most construction from 2021 to 2024, which is the last year of the eight-year bond.

The bond will also provide about $38.3 million for starting design of enhance multimodal improvements that include full street reconstruction. However, the city would need to seek additional dollars for construction.

“Those build on top of the corridorwide [improvements],” Behunek said. “With those that’s when we kind of reach that full vision the community had in the corridor mobility plan.”

Corridor Program Office spokesperson Mandy McClendon said proposed future Manchaca improvements will include increased safety for pedestrians and bikers. A shared-use path with a buffer will run along the entirety of the road, pedestrian signals will be installed at various points and bike parking areas are being explored.

Paul Roussos, a resident who lives on West Gate Boulevard and frequently travels on William Cannon and Manchaca, said he is glad improvements are being made that will help transportation in the future.

“I came to Austin in 1963 and have seen the city change,” he said. “Some of the issues come up when [the city] doesn’t plan for the future. The [Corridor Program Office] is tying to look at the overall picture.”

Although improvements to sidewalks and bike paths along the major thoroughfares are necessary, Roussos said he believes more needs to be done to help residents access the new pedestrian accommodations from area neighborhoods. Residents who live along West Gate, for example, will have trouble biking to William Cannon because of the high speeds, congestion and safety concerns present on smaller roads that he said have not yet been addressed.

Besides receiving funding from the 2016 Mobility Bond, both South Austin roadways will receive funding from the Capital Area Metropolitan Planning Organization for design and construction of specific projects.

CAMPO oversees doling out federal and state funds and regional transportation planning efforts in Central Texas. Its board, which comprises area elected officials, including District 5 Council Member Ann Kitchen, approved the funding May 7.

The city will receive about $12.58 million in funding through CAMPO to put toward the design of expanding Slaughter Lane to six lanes as well as adding a shared-use path and improving intersections. About $11.75 million from CAMPO will go toward expanding William Cannon Drive to four lanes between Running Water Drive and McKinney Falls Parkway.