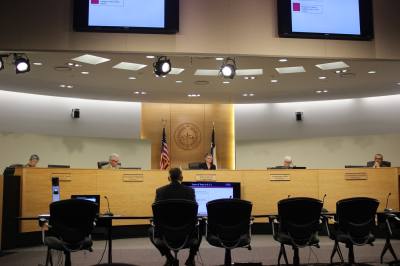 Following an executive session and a week of deliberation, Travis County Commissioners voted Tuesday afternoon to cover the costs of an election to create a conservation district that would regulate, protect and conserve the county's groundwater supply derived from the Trinity Aquifer, one of nine major aquifers in the state.

In a Feb. 20 meeting, the group behind the Southwestern Travis County Groundwater Conservation District requested the county pay to hold a May election, which county officials estimated could cost between $365,000 and $544,000. The group also requested $5,000 to help get the district’s efforts underway.

On Tuesday afternoon, Ron Morgan, chief deputy county clerk, said due to the increase in the number of entities participating in the May election, the pro rata share to fund the election saw a significant decrease and is now estimated to cost between $180,000 and $200,000.

The county will cover the costs of the election as well as provide $5,000 for operational expenses, with the agreement that if the proposed district is approved by voters it will reimburse the county overtime for the costs of ratifying the election. The vote also included the continued support and advisory from county staff.

During the election, approximately 80,000 voters who live within the district's jurisdiction will have an opportunity to approve the district in a confirmation election. Residents will also vote to elect official directors to the district's governing board.

Originally filed by State Rep. Paul Workman, R-Austin, as failed House Bill 922 last year, the legislation creating the conservation district passed after being added to HB 4345. The session in 2017 was Workman’s third legislative attempt at establishing a district in the area.

The district was not given any state funding as part of HB 4345 to begin operations and is not allowed to collect operational fees until approved by local voters, according to legislation.
SHARE THIS STORY